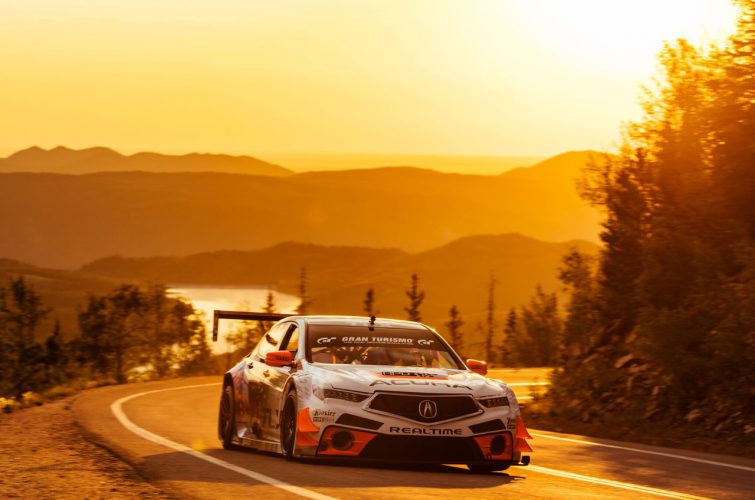 The Pikes Peak Hill Climb is the second-oldest motorsports event in the U.S. after the Indianapolis 500. The daunting 12.42-mile course with 156 turns and a 4,725-foot elevation change is a bucket-list item for any racecar driver.

With the support of Acura Motorsports and Honda Performance Development (HPD), RealTime Racing revived its Acura TLX-GT from the 2015 Pirelli World Challenge race season to take on the mountain in the Pikes Peak Open category.

“This car had an incredible journey,” Cunningham said. “When we got word in March that this was the plan, we had just gotten to restoring the third TLX, which was the four-wheel drive car. It hadn’t been touched since we stripped it of all its parts at the end of the 2015 season. In between working on the NSX GT3 program, we were able to build it back up for battle.”

The team had a day at Pikes Peak International Raceway to shake down the car and two weekends of tire testing before it was time to see how the TLX-GT stacked up.

“Race week commenced last Tuesday and the car never skipped a beat,” Cunningham said. “We had three days of practice and one day of qualifying. We ended up qualifying first in our class and second overall.”

Sunday was race day, and Cunningham started his ascent at approximately 10 a.m. local time. The conditions were perfect and he knocked more than two seconds off his qualifying time in the first section. By the time he reached the summit, he’d set a new lap record in the Pikes Peak Open class. His time of 9:33.797 was more than 12 seconds faster than the previous record held by Romain Dumas in a Porsche GT3R.

“It was an honor to run the second-oldest event in the country and to turn a time as quick as we did,” Cunningham said. “There are only a handful of people who can say they’ve done it faster than us. We couldn’t have done it without the great work of so many different RealTime crew and the support from Acura, HPD, Red Line Synthetic Oil, Hoosier Racing Tire, U-Haul, StopTech, FORGELINE, RACER Magazine, Sparco and Pikes Peak Acura.”

The entire experience was more than enough to entice Cunningham to return to Pikes Peak.

“It really is an iconic event,” Cunningham said. “The camaraderie amongst the old friends and new friends was great. The organizers were very nice and the fan turn out was huge and passionate. After the run, you’d drive back down the mountain and all the spectators would applaud and high-five you and want pictures. It’s an experience I won’t soon forget.”

The 2018 edition of the Pikes Peak International Hill Climb is scheduled for June 24.