ANOTHER WIN AND PODIUM AT SONOMA FOR REALTIME – RealTime Racing
0

ANOTHER WIN AND PODIUM AT SONOMA FOR REALTIME 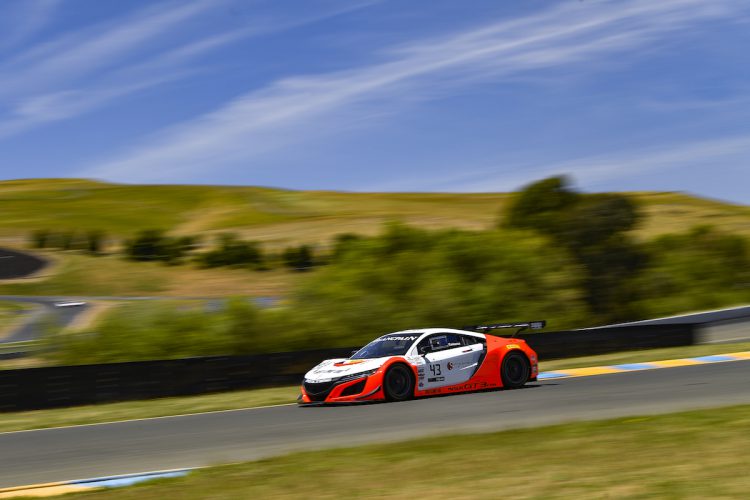 With driver Bret Curtis still out with a back injury, RealTime Racing brought in experienced sportscar driver and Northern California native Mike Hedlund in to team with Dane Cameron. Hedlund’s status as an AM driver put the No. 43 Acura NSX GT3 Evo back in the Pro-Am category after a brief stint in Pro-Pro at Canadian Tire Motorsport Park.

“Peter [Cunningham] sent me a text asking if I was interested,” Hedlund said. “The team has such a long, winning history that I told him I’d definitely be interested. Luckily, I live in the area so it was pretty easy to take off work and head to the track.”

“I’ve driven the Acura NSX street car before, but never the race car,” Hedlund said. “Luckily, Dane has so much experience that he walked me through everything and how it differed from other GT3 cars I’ve raced. He made it really easy to get up to speed.”

Cameron was on tap for a similarly strong qualifying, but when his fast lap was removed by officials for exceeding track limits, the No. 43 was knocked back to fifth on the Pro-Am grid and 11th overall for Sunday’s grid.

A strong start from Hedlund had RealTime up to fifth after the opening lap. Hedlund was holding his own with drivers in the Pro-Pro class, but eventually dropped to seventh overall.

“I tried to be aggressive on the start, but safe,” Hedlund said. “I figured as long as I could stay ahead of them [Pro-Pro class cars] and not hold them up, I was going to stay in front. I wasn’t going to block anybody, but I wanted to beat them. When you start defending though, you lose time and I wanted to make sure I stayed ahead of the Pro-Am guys behind me.”

After the pit stop and driver change, Cameron could not be caught and climbed to fifth overall before the checkered flag. The RealTime Acura NSX crossed the finish line more than 13 seconds ahead of the next Pro-Am car to take a dominant class victory.

“Mike did a really good job getting us pole in Pro-Am, ran up front with the Pro-Pro cars and gave me a bit of a cushion,” Cameron said. “With our pit cycle we had a big lead when things sorted out. Mike and the guys at RealTime made it pretty easy for me. I just had to maintain the gap and keep something in my pocket in case it went yellow at the end, but we didn’t need it.”

The win is RealTime’s 98th in World Challenge competition and sixth at Sonoma.

Cameron had a less than ideal grid spot for Sunday’s race, but was immediately on a charge when the green flag waved. From 11th, Cameron climbed to seventh overall, fourth in Pro-Am before it was time for pit stops.

“We were starting from further back than we wanted to be, so I tried to make up a couple spots and stay in contact with the Pro-Am leaders, because I knew we were going to have a really good pit stop,” Cameron said. “I knew if we could stay close to the Pro-Am guys we’d have a shot for a podium. It was hotter today and I was running on my qualifying tires, so it was a little more work. I was struggling a little bit toward the end of my stint on the used tires, but stayed close enough.”

A well-timed and executed pit stop helped Hedlund advance to second in class, but a lapped, sideways Ferrari nearly ended RealTime’s race before the checkered flag.

“He made a mistake going into 3B,” Hedlund explained. “He dropped two wheels off while I was making my move on the inside going into Turn 4. He speared into us. Not much we could do about that. Right after the hit I thought for sure we’d have a broken tie rod or something. Once we realized under yellow that everything was mechanically okay, I was able to push on the restart, but I was battling under steer because of the damage to the front aero.”

Still coming to grips with the change to the car’s handling, Hedlund dropped a spot on the restart.

One final full-course yellow helped close the gap to the second-place Pro-Am car and after the restart Hedlund was able to re-take the position. Had there been more time on the clock, he very likely would have challenged the eventual Pro-Am winner, but instead crossed the finish line in second.

RealTime will have a bit of a summer break before it’s time to return to the track August 30 – September 1. Rounds 9 and 10 of the Blancpain GT World Challenge America will take place at Watkins Glen International in upstate New York.