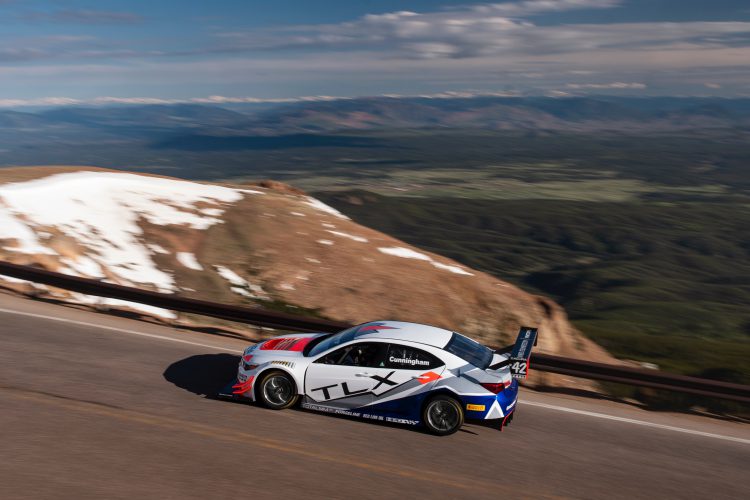 SAUKVILLE, Wis. (June 19, 2019) – RealTime Racing will make its third appearance at the Pikes Peak International Hill Climb (PPIHC), June 24 – 30. Peter Cunningham will once again take the wheel of the No. 42 Acura TLX GT in the Open class with his sights on another win and new course record.

RealTime’s first foray into the PPIHC was in 2017 as Cunningham won the Open class, set a new class record time of 9 min 33.797 sec, and was awarded Rookie of the Year honors. In 2018, he once again won the category and reset the class record, with a time 6.441 seconds quicker at 9 min 27.356 sec. Going into year three of competition, nothing short of a win and new class record will do.

To prepare for this year’s event, TotalSim US and the aerodynamics team at Honda Performance Development created a new rear diffuser for the all-wheel drive Acura TLX GT. Additionally, the HPD engine department has tuned the 3.5-liter twin-turbo V6 engine for the demanding elevation changes, specifically for the numerous hairpin turns. Last weekend, RealTime completed a successful test of the new package at Pikes Peak.

“The car performed flawlessly at our recent test,” Cunningham said. “The aerodynamic improvements and the new Pirelli tires felt great but it’s hard to quantify at this point because of the ever-changing road conditions on the mountain. I’m looking forward to race week when we can go head-to-head with our competition and showcase the capabilities of the Acura TLX GT.”

This will be the 97th running of the PPIHC, the second oldest automobile race in North America. Located just outside of Colorado Springs, Colorado, the course is a 12.42-mile stretch of public road, starting at an elevation of 9,390 feet and finishing 156 corners later on the summit of America’s Mountain at 14,115 feet.

One of the event highlights is the Fan Fest on Friday evening (June 28). More than 30,000 people turn out for this 10-block street party in in the heart of Downtown Colorado Springs to get a close up look at each of the competitor’s machines.

RealTime’s quest for another class record in the “Race to the Clouds,” is made possible with support from Acura, HPD, Pirelli, Red Line Oil, TotalSim US, Forgeline, RACER Magazine, Pikes Peak Acura and the RealTime Collection Hall.

You can follow RealTime’s progress throughout the event on the new PPIHC app.