THREE FOR THREE ON AMERICA’S MOUNTAIN 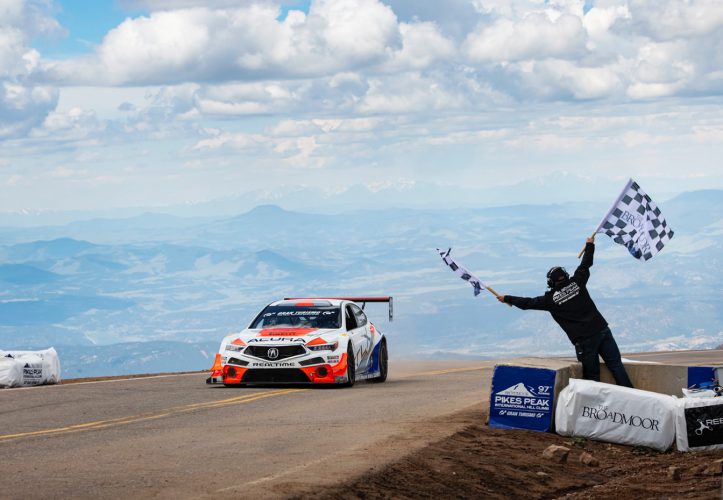 COLORADO SPRING, Colo. (July 1, 2019) – Peter Cunningham won the Open Class and set a new course record in the 97th running of the Pikes Peak International Hill Climb. As a result, RealTime Racing is now three-for-three in wins and course records at the second-oldest motorsports event in America.

After winning its class and setting course records at Pikes Peak in 2017 and 2018, RealTime kept the streak alive with an identical performance this year. Driving the No. 42 Acura TLX GT, Cunningham completed the 12.42-mile climb in 9 min, 24.433 sec., beating his previous record by nearly three seconds.

“The car performed flawlessly all month and was faster than ever right from the first test run,” Cunningham said. “Special thanks to TotalSim US and HPD for all of their efforts taking our aero package to the next level. And thanks to Pirelli for the great tires.”

Tires were especially important on race day. Practice and qualifying runs were in clear weather, but rain in the two days prior to the race toward the summit dirtied up the road, putting grip at a premium.

Even in these slippery conditions, the Acura TLX GT came out on top of the Open Class by nine seconds, and finished third overall. This follows second and third place overall finishes in 2017 and 2018, respectively.

The celebrations of the entire paddock were subdued, however, with news that motorcycle rider Carlin Dunne of California had passed away on the mountain in a bid for his fifth Pikes Peak title.

“The entire Pikes Peak family is mourning the loss of Carlin and we keep his family and friends in our thoughts at this difficult time.”

RealTime’s next track action will be in the Blancpain GT World Challenge America. Rounds 9 and 10 will take place at Watkins Glen International, August 30 – September 1.