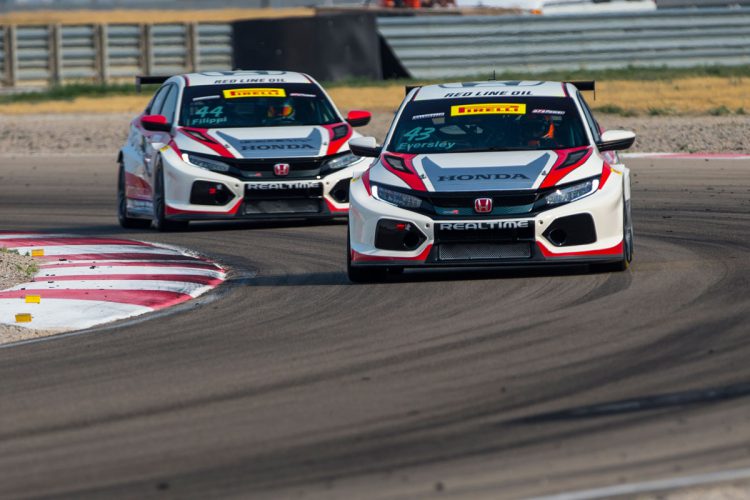 TOOELE, Utah (August 14, 2018) – In the brutally hot conditions of the Utah desert, RealTime Racing came away from the latest Pirelli World Challenge TCR doubleheader with a pair of podium finishes.

Newcomer Mason Filippi felt right at home with the RealTime team and got up to speed quickly in his No. 44 Honda Civic Type R at Utah Motorsports Campus.

“The car was awesome,” Filippi said. “I was getting used to it and I was very excited to drive it. RealTime is an amazing team with a great vibe. Everyone was really nice and I was happy to be there.”

Filippi went on to enter his best TCR qualifying performance to date. A lap of 1:59.873 put him fourth on the grid for Saturday’s race.

His teammate and current TCR Championship leader Ryan Eversley qualified his No. 43 Honda Civic Type R on the outside of the front row with a lap of 1:58.151.

Starting between the two Hyundai entries, Eversley knew they would be tough to beat at the 3.0479-mile road course. Despite his best efforts and a flawless performance, Eversley settled into the third spot where he would stay until the checkered flag.

“We knew we didn’t have the pace to win based on what we’d seen in practice and qualifying, so for me it was about maximizing points,” Eversley said. “We had some tire degradation at the end of the race, but the car held on and I was able to get a podium.”

Filippi had a great start to his race, but a fuel pickup issue near the halfway point caused him to drop back and ultimately finish 10th.

Each drivers’ fastest race lap from Saturday sets the grid for Sunday. Eversley lined up in the same spot he finished the previous race, third, while Filippi took up the sixth spot on the grid.

A series’ mandated reduction in boost for the Honda Civic Type R prior to the Utah weekend had both drivers concerned about the standing start for Sunday’s race. Their apprehensions were justified; both drivers had great reaction times, but couldn’t get the power down like they had in previous races.

“The standing start was iffy for both of us,” Filippi said. “We both got shuffled back. I think I was all the way to the back on the first lap, but I ended up passing everyone back. I had good battles throughout the rest of the race, especially in the middle battling with Jarrett Andretti and JT Coupal for a few laps.”

Eversley’s first half of the race was similar.

“As soon as the lights when out, we launched perfectly, but with the lack of power we couldn’t pull away from the line like everybody else. I faded back to eighth and I had to work really hard to get back to third. When I was there, it played out the same as Saturday.”

A late race yellow looked like it could be an opportunity to pick up more positions for the RealTime duo on the restart, but both drivers were equally as focused on keeping competitors behind them.

“I saw the yellow as a good opportunity to advance,” Filippi said. “I didn’t get the start I wanted, but I was definitely able to hold off the guys behind me. I wanted to pick up some more positions, but the tires were pretty worn by then. I didn’t save them enough for the last two laps.”

Eversley crossed took the checkered flag in third, while Filippi finished in his starting position of sixth.

The doubleheader at Utah Motorsports Campus will air on CBS Sports, Sunday, August 26, at 4pm ET.