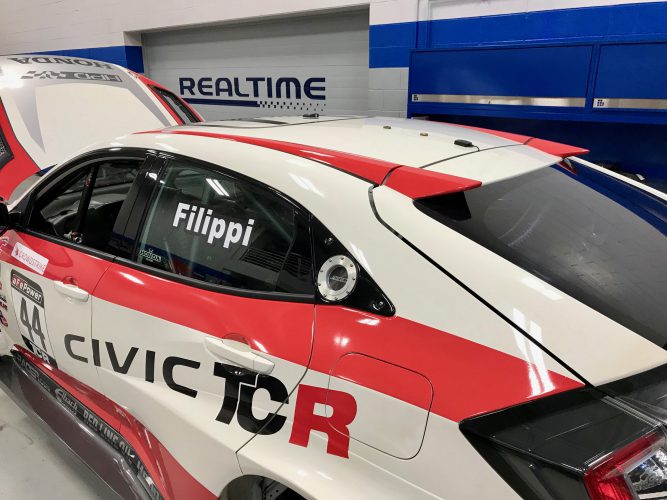 Filippi comes to RealTime with a strong sportscar background, despite being only 20 years-old. After racing Spec Miata, he moved up to the professional ranks in the Mazda Global MX-5 Cup and then onto the TCA class in Pirelli World Challenge. He was immediately drawn to the TCR category when it debuted.

“When I saw how the TCR class was shaping up and how competitive the cars were, it looked like a lot of fun to drive,” Filippi said. “I wanted to pursue that and see what I could do in TCR. It looked like a really nice platform.”

Having competed in the TCR category already this year, driving a Volkswagen, Filippi is currently fourth in the point standings. He is excited for a switch to the Honda.

“RealTime has a really strong racing history, especially in World Challenge,” Filippi said. “They are extremely competitive this year. When a seat opened up, I couldn’t pass on that opportunity.”

Filippi moves into the No. 44 Honda Civic Type R with the support of MotorizedShade.com and Shmib.com.

“Mason has already proven to be a very strong TCR driver,” RealTime team owner Peter Cunningham said. “I have no doubt he’ll be up to speed in short order in our Honda Civic Type R and I hope we can help him finish strong in the Championship.

RealTime driver Ryan Eversley leads the TCR Drivers’ Championship by 17 points with four rounds to go. Rounds 9 and 10 take place at Utah Motorsports Campus, August 10 – 12. The races will be streamed live on world-challenge.com.