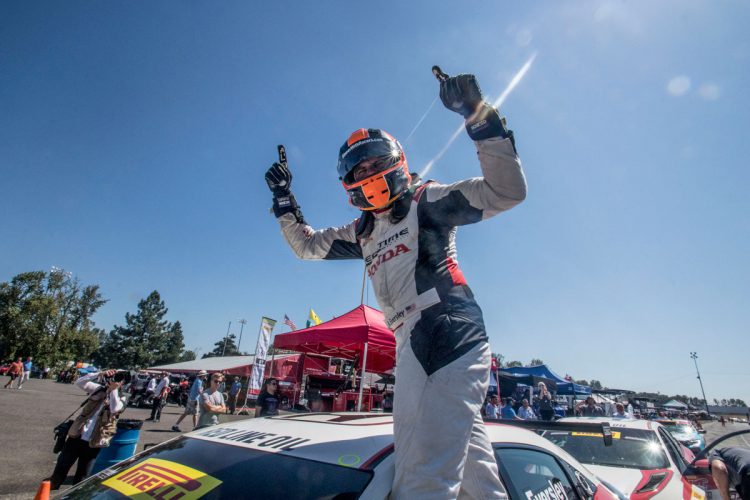 Adam Merzon was scheduled to team with Eversley once again in Portland, but was called back home to Connecticut at the last minute. Rather than let the No. 44 Honda Civic Type R TCR sit under the tent, RealTime sought out another driver to fill the seat. The team chose three-time Pirelli World Challenge Champion Michael Cooper for the job just in time for qualifying.

In his first time ever behind the wheel of a TCR car, Cooper made huge improvements through the 20-minute session and put the No. 44 fifth on the grid.

“It’s a proper race car,” Cooper said. “It was a little difficult to adapt back to a front-wheel drive, turbo car in a short amount of time. In qualifying, by the time I’d figured the car out, I’d already gone past the window of when the tires are at their optimum, so I didn’t get a great lap, but I was fifth, which was a good position to fight from.”

Starting from pole, Eversley took command of the race with a clean start that enabled him to open an early gap over the Hyundais of Mark Wilkins and Michael Lewis.

Meanwhile, Cooper continued to show his racing prowess and moved up to fourth at the start.

“I was able to make up a position on the start,” Cooper said. “It was the first time I was having to push on cold tires, so I was a little conservative and lost maybe a couple seconds to the cars ahead of me. The gap stabilized and I was able to close down a lot toward the end.”

Eversley held a commanding lead over the Hyundais, but it started to close within the last 15 minutes of the race and even more so as the three moved through traffic.

“We probably had the best car out there,” Eversley said. “I was feeling the pressure from the Hyundais, but everything was going well until we’d catch the TCA cars. I’d lose time getting around all except maybe three or four of those guys. It affected the race because we couldn’t really battle because we were too worried about what those guys were going to do.”

With three minutes to go, a TCA car Eversley was passing swerved into him, damaging the left side of the car. Wilkins was able to get by for the lead and Lewis took over second on the following lap.

“In the end a TCA car ran right into the side of me,” Eversley explained. “It towed the left front and left rear in pretty good. Then, with about two laps to go one of the Hyundais made a pretty aggressive move, got to the inside and didn’t leave me any racing room. We had contact and that knocked the right front tow in.”

Eversley was able to hold on for the final podium spot with teammate Cooper hot on his heels in fourth.

“It was pretty frustrating to go from leading the race to settling for third,” Eversley said. “I thought the driving could have been a little cleaner. I was happy to get points and finish the race considering the amount of contact there was.”

Each drivers’ fastest lap time in Saturday’s race set the grid for Sunday. Eversley lined up second with teammate Cooper behind him in fourth. Before the race could even get started, the third-starting Hyundai of Wilkins came to a stop on the formation lap and was out of the race.

When the lights when to signal the standing start, Eversley rocketed his Honda into the lead and never looked back. Though he was under intense pressure from Lewis’ Hyundai, Eversley didn’t waver and took the win, his third of the season.

“It was a game of tire conservation versus capitalizing on points since Wilkins was out,” Eversley said. “I put my head down and tried to make as many clean laps as possible. At times when we got bottled up in traffic, I’d try to back Lewis up to Cooper so maybe my teammate could get into second and take some points away. I was playing the game there to maximize points for the championship.”

Cooper had a front row seat for Eversley’s run to the checkered flag and was ready to scoop up second place from Lewis if he made a mistake, but in the end it was a third-place finish in his second-ever TCR race.

“I’m pretty happy with a podium,” Cooper said. “The four drivers that are running at the front of that series and even some of the privateers behind them are super strong and know those cars really well. I remember when I was running touring cars like that, it’s tough for someone to come in and be on pace with the guys that are racing every weekend. I’m really happy to get a podium my first go at it.”

Eversley continues to lead the TCR Drivers’ Championship with four rounds to go.

“I’m very happy with the result,” Eversley said. “The Honda reliability has been a big thing for us. We may not always be the fastest cars, but we seem to always be there when it counts and today was no exception. Big thanks to RealTime and HPD for building such a fast and reliable car. We were there at the end and you can’t do that without a good race car, so I’m very happy and thankful to everyone on the crew.”

Next up for RealTime Racing are Rounds Nine and 10 at Utah Motorsports Campus in Tooele, Utah, August 10 – 12.