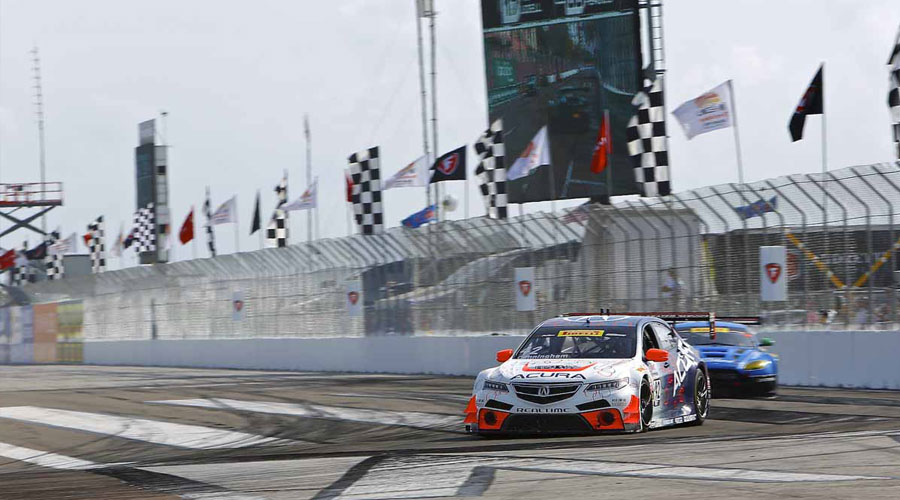 The second round on the Pirelli World Challenge GT calendar was only a few short days after the first.  As soon as the RealTime Acura transporters were packed up on Sunday in Austin, Texas, they were en route to St. Petersburg, Florida, where the first track sessions took place Thursday afternoon.

The team was looking forward to the St. Pete weekend, since the 1.8-mile temporary street circuit is where Eversley scored the first race win for the TLX-GT last year. Eversley’s No. 43 Acura/HPD/Red Line Oil/RealTime Acura TLX-GT was hit with bad luck right away, however, when a flat tire ended his qualifying run early. The culprit was later found to be a small metal key. At the conclusion of the 20-minute qualifying session, Eversley was shown in 16th and Cunningham had place his No. 42 in 18th.

Eversley had a fantastic start, picking up four positions in the opening laps. He then commenced an epic battle with both Bentley entries while working through the GT Cup traffic. His pass on the No. 88 Bentley earned Eversley the Cadillac ATS.V Move of the Race Award. Once around both cars, Eversley was P10, where he would finish.

“I’m not normally excited to finish 10th in a race, but we started on the second to the last row and worked our way up through guys that were on the podium at the last event,” Eversley said. “I was catching Nissans and Bentleys and Porsches toward the end of the race and they looked like they were struggling. Our car wasn’t the fastest, but it was easy to drive and I didn’t feel like I was abusing the tires or the brakes. I think we’ve learned a lot about the Acura in terms of tire degradation at COTA. I’m really happy for the RealTime guys because they worked really hard after our issue in qualifying.”

Cunningham had to take on the same Bentleys in the later part of the 50-minute race. He made it past the No. 88, but ran out of time to catch the No. 87 and finished 13th.

“At first I was just biding my time, because it’s hard to pass on a tight street course,” Cunningham said. “Frankie Montecalvo went long and I got by him, but then I was by myself for awhile. I lost some ground on the group ahead of me when I had to work through the GT Cup field, but I eventually caught back up to them. Several cars came back to me at the end of the race: the Bentleys, a Ferrari and a McLaren. We definitely had a good car at the end and some of these other teams didn’t. I think we can improve on our finish tomorrow.”

Eversley had his hands full the entire race. While trying to get around the No. 9 McLaren 650S he also had a rear-view mirror full of Bentleys. Eversley got around the McLaren with a textbook pass in Turn 1 just before another multi-car incident brought out the second full-course yellow.

When racing resumed, there was only time for two laps and Eversley took the No. 43 home in sixth, scoring valuable manufacturer points for Acura.

“There are a lot of great drivers in this series who’ve won numerous championships and we’re running right up there with them in our second weekend with the rear-wheel drive setup,” beamed Eversley. “I’m pumped! I’m ready to go to Long Beach tomorrow! We just needed a few more green laps, because I think we had something for the GT leaders today. We’re coming away with some manufacturer points, which is huge, and I’m very, very happy.”

Though Cunningham had a less than enviable starting spot in 18th, he too was able to avoid the street course chaos and keep his No. 42 pointed in the right direction.

“Qualifying is everything on a street course like this and I messed up by not getting a good time in the race yesterday, which sets the grid for today,” Cunningham explained. “There wasn’t a whole lot I could do since we had very few green-flag laps, but the restarts and taking advantage of others’ misfortunes allowed me to move up.

“We’ve got two sharp TLXs here that won’t need to be rebuilt before Long Beach like some of the other teams,” Cunningham added. “Thanks to RealTime, HPD, Acura and all of our supporters.”

Next on the schedule is another street course for RealTime Acura; the Grand Prix of Long Beach takes place April 15 – 17. A recap of the St. Petersburg weekend will air on CBS Sports Network, Sunday, March 20 at Noon ET.