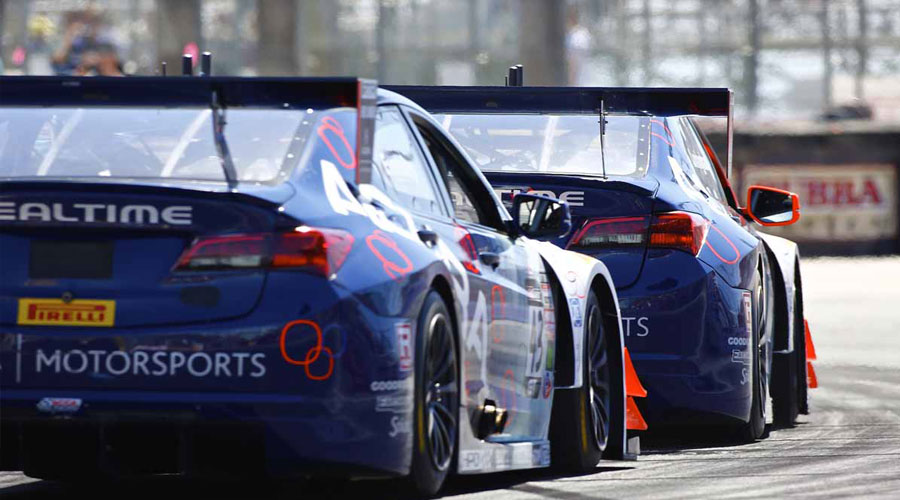 LONG BEACH, Calif. (April 17, 2016) – Both of the RealTime Acura TLX-GTs survived contact on the streets of Long Beach to finish seventh and 12th in the latest round of the Pirelli World Challenge Championships. Despite an early pit stop for Ryan Eversley and a hard hit for Peter Cunningham, both drivers were able to improve on their starting positions.

The Long Beach event doesn’t afford much track time, so after two practice sessions totaling one hour and 15 minutes, it was time to qualify. Eversley was able to qualify his No. 43 Acura/HPD/Red Line Oil/RealTime Acura TLX-GT in 10th, while Cunningham put his TLX-GT 16th on the grid for Sunday’s 50-minute race.

Eversley’s race started with a bang, literally, when he was hit from behind and knocked into the car in front of him.

“It was just one of those stack up situations that happens on street course starts,” Eversley explained. “That caused us to pit, because the hood was going to come off. The guys made the right call by pitting us.”

Thankfully a full-course caution was issued for a different incident and Eversley was able to get his car repaired and back on track without losing a lap. He returned to the circuit in 20th, four spots behind Cunningham who picked up two positions on the start.

After the restart, Eversley picked up five spots and Cunningham another two before the next full-course caution was issued.  The race resumed with 20 minutes remaining. In that time, both Cunningham and Eversley worked their way into the top 10.

With less than 10 minutes to go, Cunningham was struck from behind in Turn Six, which sent him into a spin.

“I was spun around, but luckily I was able to keep it off the wall and continue,” Cunningham said. “It was disappointing, because the car was improving as the race continued and we were looking at a top-10 finish for sure.”

At the checkered flag, Eversley was all the way up to seventh, three spots up from where he started despite the early pit stop.

“We went from 20th to seventh after a pit stop,” Eversley said. “It’s an impressive result and I think we’re making this car better and better. We just need longer green runs in the races and better qualifying, which is probably what we’re going to focus on now, because we have developed a really good race package.”

After recovering from the hit in Turn Six, Cunningham had very little time to make up the lost ground, but was able to finish 12th.

“The finish wasn’t representative of the car’s performance, but we’ve got two cars in one piece and we’ll go on to Barber Motorsports Park in a few days having learned a good bit,” Cunningham concluded.

The Pirelli World Challenge paddock is already en route to Birmingham, Alabama for the next round at Barber Motorsports Park. The event runs April 21 – 24 with both Saturday and Sunday’s GT race streamed live on world-challenge.com.