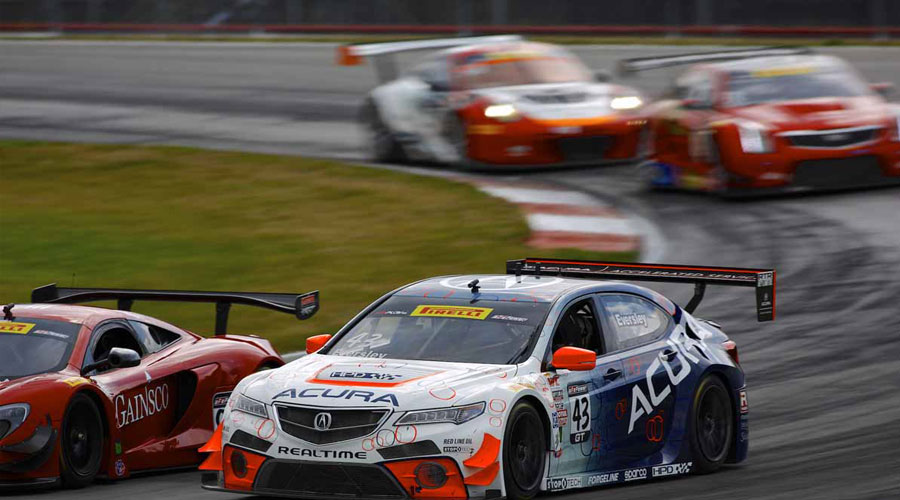 RealTime’s best result of the season thus far started with its best qualifying performance. Eversley stunned pit lane with a 1:15.682 lap on his final flyer, putting him third on the grid for Saturday’s race. Cunningham qualified his No. 42 Acura/HPD/Red Line Oil/RealTime Acura TLX-GT 17th.

“We had a mechanical issue in the first test session, but the guys got the car back out for the second session and although there wasn’t official timing, I was able to run with Pat Long and anytime you can run with him, you’re probably going pretty fast. I was excited for the next day,” Eversley said.

“In practice, I think we were fifth or sixth quick, but our transponder didn’t work, so we had to qualify in the second group,” he added. “I was able to go out there, put my head down and run the fastest lap we’ve ever done here. That put us third on the grid.”

Saturday’s race held no surprises for Eversley, who protected his No. 43 on the start and held on to third place for the entire 50-minute, caution-free race. It was the first podium for RealTime since Eversley’s St. Petersburg victory in 2015.

“It was very emotional to be back on the podium, because it’s been over a year since we’ve been there and if you look at the history of RealTime, they are a very successful team, so to get us back up there was huge,” smiled Eversley. “It was a big shot in the arm to see all the guys happy and high-fiving and laughing at the podium, because all the hard work they put in finally showed in the result.”

“I wasn’t happy with the car in qualifying, but in the race, it felt a lot better,” Cunningham said. “We made a couple tweaks to the chassis. It was a combination of that and getting to run more laps in succession— rather than just in- and out-laps like in practice and qualifying—that allowed me to get in a groove. I was able to work my way through traffic and passed four cars.”

Each driver’s fastest race lap from Saturday set the grid for Sunday’s event. Eversley once again lined up P3 while Cunningham put his Acura P14 on the grid.

During the pre-race festivities, a brief rain shower passed over the track. It left standing water on some parts of the circuit, but not enough for teams to employ rain tires. Drivers were given extra laps behind the pace car to familiarize themselves with the conditions before the race went green.

Only three corners into the opening lap, Eversley found himself pinned between a Nissan and a Bentley with nowhere to go. His Acura skidded off the track and into a wall, bringing his race to a premature end.

“I had a decent start and I was running behind Andrew Palmer going into Turn 3, which was a little damp,” Eversley recalled. “We were both cautious and one of the Nissans tried to come around the outside of us. I kept my line down the middle of the straight. Meanwhile, the other Bentley was on my right rear and we were all racing into Turn 4 and the Nissan came over on me. To avoid wrecking him, I moved over to the right and Fong had overlapped me by that point, so it put me into the wall.”

The cleanup and lengthy full-course caution took up half of the race’s scheduled 50-minute duration.

With two cars eliminated in the incident, Cunningham was now up to 12th, but soon under attack by a McLaren.  In slippery, but drying conditions, Cunningham went side-by-side with the McLaren twice.

“Today’s track conditions were pretty treacherous,” Cunningham said. “We got two extra pace laps, which was a good decision, because Turn 4, 5a, 5b and 5c were drenched in water, but the rest of the track was dry. After the yellow, it stopped raining and wasn’t nearly as sketchy, but then it started raining again and Turns 4 and 5 were a gamble to know how slippery it’d be.”

After the McLaren came under attack by a Ferrari, Cunningham was able to cruise to the checkered flag in 12th without incident.

The RealTime Acura crew have their work cutout for them with Lime Rock Park right around the corner: May 27 – 28. Watch both races live on world-challenge.com.