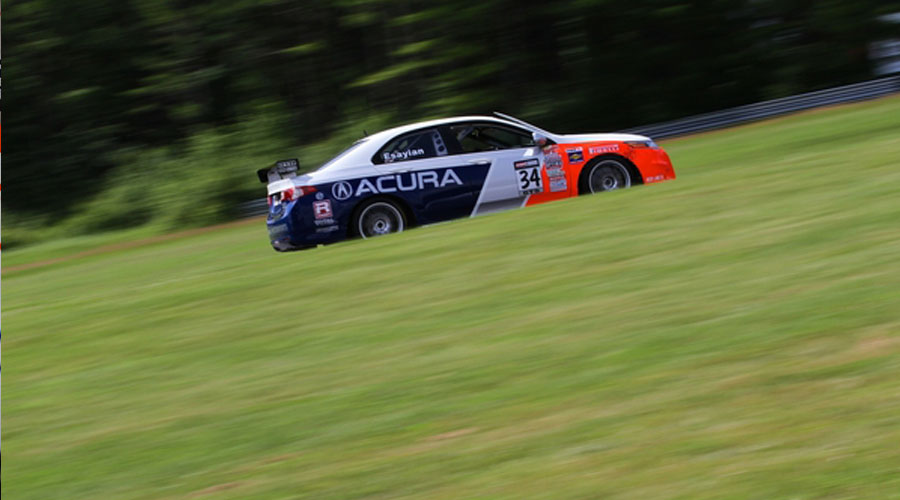 LAKEVILLE, Conn. (May 28, 2016) – They may have been down a car, but RealTime Acura still packed a punch in the latest rounds of the Pirelli World Challenge at Lime Rock Park. Taking over Peter Cunningham’s Acura TLX-GT, Ryan Eversley scored a sixth and fourth-place finish.

Following an accident in the second race at Canadian Tire Motorsport Park, Eversley’s No. 43 Acura/HPD/Red Line Oil/RealTime Acura TLX-GT needed to return to the RealTime shop in Wisconsin for repairs. Teammate Cunningham stepped in, however, and offered up his seat in the No. 42 to Eversley.

Ryan got to grips with the No. 42 chassis during promoter test sessions on Tuesday. When practice rolled around Friday morning, Eversley’s car officially wore the No. 43 and he came out of qualifying 10th.

Eversley read the start to perfection, picking up two positions on the opening lap of the 50-minute race.

“I shot to the outside and everybody crowded to the inside,” Eversley said. “We have a good TLX V6 motor that powered me around the outside and past a lot of cars. I was able to hold my line around Turn Two and when I came into Three, I just held the bottom and held the outside into Four.”

Up to eighth, Eversley reeled in the No. 6 McLaren and used traffic to his advantage to take ahold of seventh.

“The McLaren got bogged down by a GT Cup car and I shot to the middle, because he went all the way to the inside,” Eversley explained. “I went right by him, took the lane away and got on the brakes. The TLX-GT stopped perfectly and I never saw him the rest of the race.”

Near the end of the race, Eversley was promoted to sixth when a front-runner was issued a drive-through penalty. He then had to defend his spot to the very last lap with the Acura’s tires fading.

“I think I might have gone too hard, because with about five or six laps to go, I saw the Cadillac of Michael Cooper creeping up and then on the last lap, I had a big ABS moment into the hairpin and he got a run on me,” Eversley recalled. “I tried not to wreck or spin and it ended up costing him a spot.”

Eversley crossed the line in sixth, just a fraction of a second ahead of Patrick Long’s Porsche. The progress from 10th to sixth earned Eversley the VP Racing Fuels Hard Charger Award.

“All in all I’m really happy with the Acura TLX today,” Eversley said. “We drove the No. 42 chassis and gave them a top-six result and got Acura some good points, so we’re really happy.”

Each drivers’ fastest race lap from Friday set the grid for Saturday’s race, this put Eversley eighth on the grid. Once again, he timed the start to perfection and picked up four positions by the time he got to Turn Two.

“I have one of the best engine guys in the business and I learned if I left-foot brake on the start and get the boost up, then drop the brake like a standing start, the TLX just takes off,” Eversley said. “I got the Pirellis nice and hot on the start, so when I went, I had zero traction control, zero wheel-spin and just took off like a drag car.”

Eversley was reeling in Johnny O’Connell’s Cadillac when it suffered a flat tire, allowing the Acura to breeze by and into third.

For a large portion of the 50-minute race, Eversley was in a groove with a comfortable margin to the Audi of Kyle Marcelli behind him. As the race drew nearer to the finish, Marcelli was all over Eversley’s bumper and got by him in Turn Five.

“Marcelli was running us down,” Eversley recalled. “He has a mid-engine car, so on a track like this, he was going to get us eventually. I hit some debris or something going into Turn Five and he slid by.”

After that, Eversley had no problem cruising home to a fourth-place finish.

“Hats off to the RealTime Acura team, Honda/HPD and everyone at the shop back home working on my car,” Eversley said. “Today was a big day for points!

“It was a great weekend for RealTime and Acura,” Cunningham added. “There’s a lot of tough cars out there and for Ryan to be able to go head-to-head with all those different makes really is a testimony to this Acura TLX and everything that RealTime and HPD have done to make it as strong as it is.

“We also want to send a major amount of respect and love to Andrew Palmer and Jorge De La Torre, who are recovering from injuries in the hospital right now after an accident in the warm up,” Eversley concluded on a somber note. “Everyone at RealTime is thinking about them and hoping to see them back out here soon.”

Next up on the World Challenge calendar is RealTime Acura’s home track: Road America, June 23 – 26.