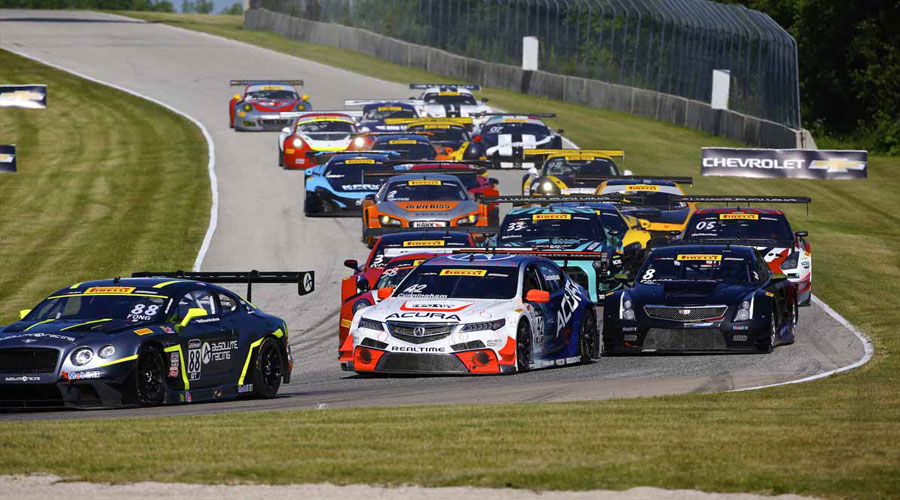 The No. 42 and No. 43 Acura/HPD/Red Line Oil/RealTime Acura TLX-GTs were strong out of the box on the ultra-fast four-mile, 14-turn permanent road course.  Come qualifying on Friday afternoon, it looked like it might be an all-Acura front row, but Ryan Eversley’s fast lap was beat by the No. 88 Bentley in the final seconds of the session. This meant Eversley would line up on the outside front row, and Peter Cunningham would start third.

Both RealTime Acura cars timed the start perfectly and were around the Bentley by Turn Five. From there, both Eversley and Cunningham checked out from the rest of the field. Eversley led the 50-minute, caution-free race all the way to the finish with teammate Cunningham right behind him.

“Today was really fun,” smiled Eversley. “I knew I’d have PD running with me, because we have really strong cars, so when we cleared everybody out of Turn Five on the first lap, I knew we’d be able to work together and be smart. After that, it was all about doing the best you can without hurting the car. It was green flag the whole way, so my biggest concern was making sure the Pirellis lasted to the best of our abilities and they were good to go the whole way. When we crossed the line 1-2 it was just a dream come true!”

It’s the second podium of the season for RealTime, but the first of the year for Cunningham, who’s last podium appearance was on the streets of Houston, Texas, in 2013 when the team ran in the GTS category.

“This TLX effort has gone through a lot in the last two and a half years,” Cunningham said. “A lot of hard work has gone into the program. Certainly our first one-two finish and first win of the year is a tribute to the RealTime guys and HPD. We’ve got quite a car here and we’re up against some stiff competition. I’m very proud of everyone involved and it couldn’t have been a better day at a better place.”

Each driver’s fastest race lap from Saturday’s event set the grid for Sunday. This made Eversley the polesitter, while Cunningham lined up P3.

Eversley did some heads up driving to stay ahead of the No. 05 Nissan GTR GT3 on the start.

“When we got into Turn One, he got a really good run on the outside,” Eversley recalled. “I always give racing room, so I let him go around the outside and we raced into Turn Three and he actually braked a little early and was going to try and get me on the way out, but the yellow came out and I think, had it stayed green, he would have had a good run into Turn Five on me and it would have been a good race.”

Cunningham, meanwhile, had a close call with the Bentley on his start.

“I had some drama at the start when the Bentley thought he was clear and moved over,” Cunningham said. “He wasn’t clear and had I stayed on the gas we would have had a big wreck. I elected to breathe the throttle and when that happened, other cars had the momentum going into Turn One and got by me.”

It only took that small throttle lift to drop Cunningham back to fifth on the opening lap. Eventually, he was able to pick up a spot and finish fourth.

“I didn’t quite have the car I had yesterday,” Cunningham explained. “I was a little off entering Turn One and the Carousel. I was a little off, but that’s all it takes on a grid like this. My car wasn’t quite as good when there was a car ahead or even two car lengths ahead. That wasn’t helping things compared to yesterday. Still, a very good day and an awesome job by Ryan, an awesome job by RealTime, HPD, Acura, Red Line Oil and StopTech.”

Eversley left the GT field in the dust up front, even surviving a restart after a full-course caution on the opening lap. By the time the checkered flag dropped, Eversley had a 2.623-second margin over second place.

“Once we got free, I was trying to manage my tires, but there was only 30 minutes to go after the restart, so I thought ‘I’m going to go as fast as I possibly can,’” Eversley said. “That was it to the end. It wasn’t the hardest race once we got clear on the restart, but yesterday we had to save the tires and today it could be a sprint all the way to the end.”

The double victory was in front of hundreds of invited guests and family members. RealTime also hosts all the World Challenge teams at a chicken roast during the Road America race weekend, which again went off with much aplomb.

“It’s definitely an honor to race at Road America and very special to be here in front of so many of our friends and family,” Cunningham concluded. “They willed us to the podium and helped us to have such a great weekend. Thanks to Butch for once again providing the best chicken ever on Friday evening for the 25th Annual RealTime Chicken Roast presented by Pirelli and Pirelli World Challenge.”

RealTime Acura stays in the Midwest for its next race, July 29 – 31, at Mid-Ohio Sports Car Course in Lexington, Ohio.