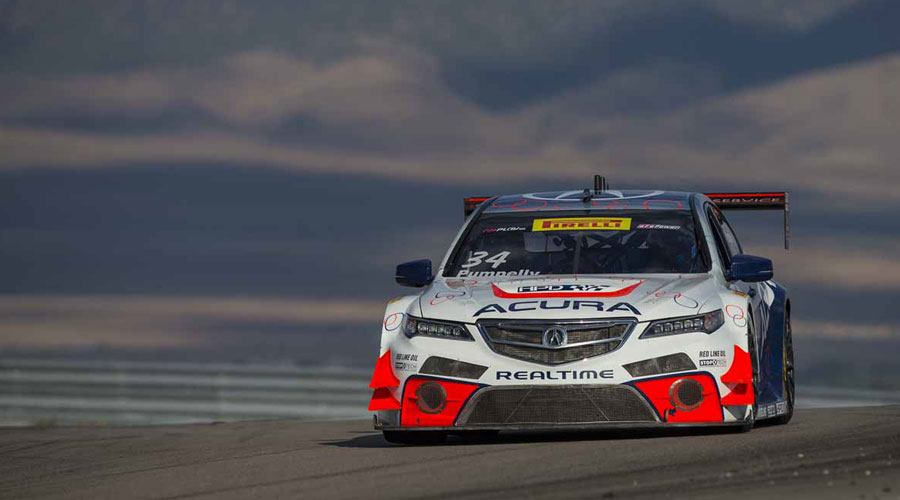 Drivers Ryan Eversley and Spencer Pumpelly were able to make solid progress through practice in their Acura/HPD/Red Line Oil/RealTime Acura TLX-GTs. When it came time to qualify, Pumpelly put his No. 34 eighth on the grid and Eversley’s No. 43 was 12th. Both were confident they still had some setup changes up their sleeve to find even more pace come race time.

Saturday’s race got off to a wild start with back-to-back full course cautions for accidents in Turn One.  Eversley timed the start and restart expertly and moved from 12th to eighth before the first full-course yellow, and then eighth to second on the restart. His 10-position gain earned him the Optima Batteries Best Start Award.

Pumpelly was able to pick up a spot on the initial start, but picked the wrong lane into Turn One on the restart and fell back in the order.

“Two cars came together going into Turn One and forced me to go wide and then a third car came into the picture backwards and I had to go wide yet again,” Pumpelly explained. “By the time I got back on track, most of the field had gone by.”

He resumed in 10th and was able to work his way back up to seventh, only to lose a spot on the final lap and finish eighth.

Eversley held onto second for most of the 50-minute race, but eventually fell into the hands of Adderly Fong’s Bentley and Patrick Long’s Porsche. He very nearly lost a spot to the McLaren of Colin Thompson at the finish, but held onto fourth place by a nose at the finish line.

It was the fifth top-five result in-a-row for RealTime Acura, including two wins at Road America in June.

Each driver’s fastest race lap from Saturday set the grid for Sunday’s race. This put Eversley sixth and Pumpelly 12th.

As the cars sped away from the grid, Pumpelly immediately radioed the crew with a problem.

“As I was pulling away from the grid to start the formation lap, I noticed that the revs went up, but the car didn’t move any quicker,” Pumpelly said. “We got it to the pit box and took a look at it. The guys found that there’d been something in the driveline that snapped. We have to go over the curbs pretty hard here to stay competitive. As strong as these RealTime Acuras are, it’s really rough on these cars and I guess it was too much.”

The DNF was extra painful for Pumpelly, who had been second-quickest in the morning warm up after some hard work from the RealTime team.

“It’s unfortunate, because we were having a really good weekend,” Pumpelly added. “All the changes were making the car better and we had a great car this morning in warm up. I was really looking forward to racing today, but didn’t get the opportunity.

“I appreciate all the effort the RealTime guys put in and it’s been great racing with this team for two races.”

Eversley had another strong start, moving up a spot into fifth. While sitting comfortably in fifth with 15 minutes to go, a suspension failure sent his Acura spinning into the gravel.

“Once the thing spun around, I knew it was suspension failure or a flat tire,” Eversley recalled. “Either way I’m pretty sure it was from curb usage. No one was surprised about that. We were definitely taking advantage of the curbing in the Turn Nine chicane. That was the only way we could keep a gap on the guys behind us and catch the guys ahead of us.”

Eversley was able to limp the car back to pit lane, but that is where his race ended.

“I’m really proud of how well we got the car handling today,” Eversley said. “I felt like I was able to move up into the top five and hold my position and hold pace. I’m bummed we couldn’t get the Acura the result it deserved for the RealTime guys.”

RealTime Acura still has three rounds remaining in the Pirelli World Challenge GT Championship. The next up is Sonoma Raceway, September 16 – 18.