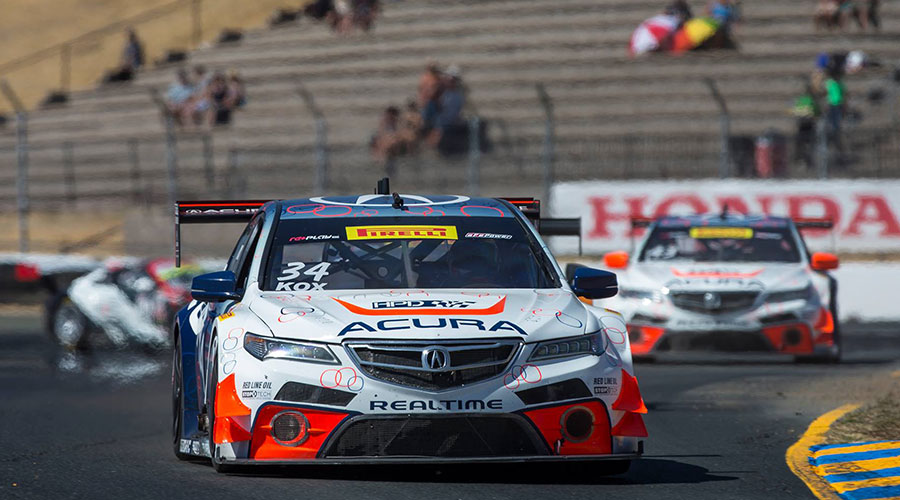 The next day in qualifying, Eversley put his No. 43 Acura/HPD/Red Line Oil/RealTime Acura TLX-GT 10th on the GT grid. Kox, an Acura NSX GT3 test pilot making his World Challenge debut, qualified the No. 34 in 16th.

Last year’s World Challenge races at Sonoma saw a lot of contact that hindered the performance of RealTime’s Acura TLX-GTs. Saturday’s race was thankfully uneventful for both drivers, as Eversley held station in 10th all the way to the checkered flag and Kox picked up a spot to finish 15th.

“I’m honestly really happy with the result,” Eversley said. “Both of our cars are in one piece and we’re going to be rocking and rolling tomorrow. I’m glad the Acura TLX-GT held together for us, because it was a pretty tough race. It was really hot and there’s always lots of attrition in the races at Sonoma.”

In his first visit to Sonoma Raceway and first ever World Challenge race, Kox was happy with the progress he made racing the Acura TLX-GT for the first time.

“The goal was to go as fast as I can,” Kox said. “I have a teammate who’s been driving this car much longer than me and he’s my benchmark. We’ll see how things go for race two.”

Each driver’s fast race lap from Saturday set the grid for Sunday. Eversley took up the 13th spot on the grid, while Kox found himself in 16th.

On the opening lap, Eversley got stuck behind a Bentley on the outside of Turn Two, causing him to lose a couple positions. Teammate Kox was the beneficiary, however, as he glided past the bottleneck into 10th.

Kox was able to hang on to 10th all the way to the checkered flag.

“For sure today was better,” Kox smiled. “The guys at RealTime Acura did a fantastic job for me. They gave me a great car to drive and I improved as well. My teammate tells me that if we can finish in the top-10 that is the best we can hope for this weekend, so I’m honored that in my second race with RealTime I finished in 10th place.”

Eversley was able to recover the positions lost on the start and even advanced one further to finish 12th.

“All in all this weekend at Sonoma has gone better than last year for the Acura TLX-GT,” Eversley said. “I’m really happy with the performance of the cars this weekend considering how hot it was and how bumpy this track is. We had no mechanical problems whatsoever. We’re leaving with both cars in good shape and a good shot at a top-five in the championship heading to Laguna Seca.”

Only one race remains in the 2016 Pirelli World Challenge GT calendar. RealTime Acura will take on Mazda Raceway Laguna Seca in two week’s time. The final race will be streamed live on world-challenge.com at 4:30pm ET, Sunday, Oct. 9.