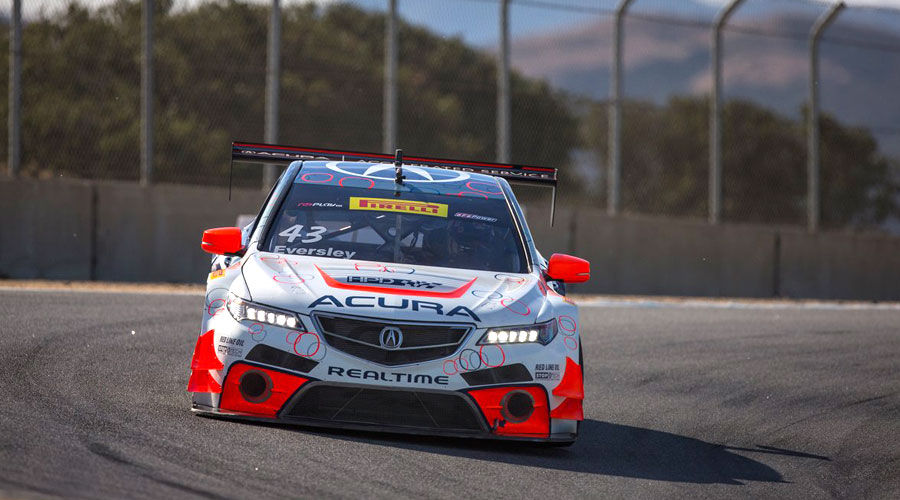 MONTEREY, Calif. (Oct. 10, 2016) – The swan song for the Acura TLX-GT ended with both Ryan Eversley and Spencer Pumpelly in the top 10 at Mazda Raceway Laguna Seca. RealTime Acura ended the season fourth in the Pirelli World Challenge GT Team Championship.
The World Challenge finale at Laguna Seca was a single-race event. Teams practiced on Friday, qualified on Saturday and raced on Sunday. RealTime Acura lined up P15 (Pumpelly) and P18 (Eversley) for the 50-minute race.

The race was interrupted by three full-course caution periods, including a late yellow that resulted in a final lap dash to the checkered flag. Pumpelly was up to 11th in his No. 34 Acura/HPD/Red Line Oil/RealTime Acura TLX-GT before the final yellow and Eversley 13th in the No. 43 TLX-GT. Both drivers did an excellent job on the final lap sprint, avoiding multiple incidents. Pumpelly crossed the line in ninth, followed by Eversley in 10th. “It was a tough race,” Pumpelly said. “It seemed more like three short sprints, interrupted by yellows, than a single race. I had a good start, and managed to pick up a couple of spots in the first lap, but we went yellow right away. Then we only went about three laps before the next yellow. On the second restart, I thought I might have something for [J.D.] Davison and [Michael] Lewis, but then we had another caution. On the final restart, there was a lot of pushing and shoving, and we came through for ninth. It’s been a pleasure driving for RealTime Racing and Acura. The TLX GT has been a blast to drive. I’m grateful for the opportunity.”

Eversley ended the 2016 season sixth in the GT Drivers Championship.

“I had a good start, and slotted in right behind Spencer [Pumpelly],” Eversley said. “But as we were going up the hill, [Michael] Schein slid off the track and slammed me off as he came back on track. That dropped me back a bunch of positions, and I had to fight my way back. The last lap restart was wild, cars were running into each other in Turn Six and I made up some ground.” The Pirelli World Challenge season final represented the final race for the Acura TLX-GT, which RealTime has run since 2014. The Wisconsin-based team now prepares to debut the Acura NSX GT3 in World Challenge competition next year.

“Looking back, I’m super happy and thankful to have represented RealTime Racing and Acura with the TLX-GT again this year,” Eversley said. “It’s been a fantastic season, especially the [two-victory] sweep at Road America!”