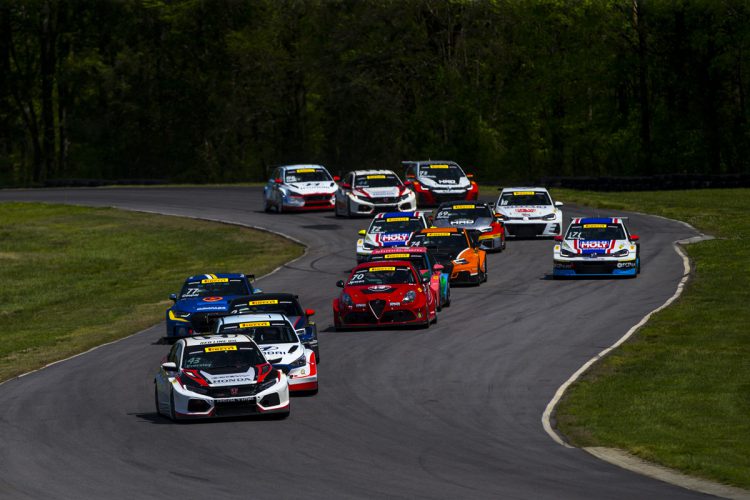 What looked to be a disastrous start to qualifying ended up being the recipe for success; Eversley ran off the track on his first lap and hit the tire wall.

“We’d been doing a lot of work with the brake bias since we’re still getting acclimated to that system on this car,” Eversley said. “We reset the bias to where we thought it would be good. My first time into Turn One, I went flying off the road. It spun around and around and hit the tires, but it wasn’t a bad hit; it was all cosmetic. I drove it around onto the track and everything was straight, no vibrations or leaks.”

Eversley wanted to give the car a lap before bringing it onto pit lane for the crew to look over. That lap, a 1.55.483 (101.93 mph) ended up being his pole-setting time. Moments after he crossed the line another incident brought out a red flag and ended qualifying early.

Saturday afternoon’s race began with a rolling start. Eversley had the No. 77 Audi driven by JT Coupal and the No. 99 Hyundai of Mark Wilkins pressuring him into Turn One, but the Honda was able to break free and hold the lead.

Wilkins continued to pressure Eversley through the opening laps until the pair started to work through slower traffic. Eversley put his Honda exactly where it needed to be and came through the pack of cars five seconds ahead of Wilkins.

With less than 10 minutes to go in the race, Wilkins’ Hyundai had mechanical trouble and pulled off the circuit. This gave Eversley clear sailing to the finish line and the first North American victory to the Honda Civic TCR. It was Eversley’s first World Challenge victory since Road America in 2016 and RealTime’s 90th series victory.

“Where I was able to win today wasn’t necessarily about outright pace, but more dealing with traffic,” Eversley said. “We were pretty much nose-to-tail battling, but when we had to go through traffic, I pulled out a five-second lead and was able to maintain that. Before Mark broke, I think we were stalemate at that five seconds and I was comfortable with that.

“From there it was a matter of making laps, don’t get into any trouble in traffic, no mistakes and we came home with the win.”

Newcomer Merzon kept his Honda in the fight and finished right where he started in P12.

“It’s been years since I’ve driven a car without ABS and I’ve never raced a car with front-wheel drive,” Merzon said. “This weekend was a big learning curve for me, but I feel like I was on pace and the Honda Civic TCR was a blast to drive.”

Sunday’s grid was based off of each driver’s fastest race lap from Saturday. Eversley lined up third behind Wilkins’ Hyundai and the second Hyundai driven by Michael Lewis. Merzon started 14th.

The race began with a standing start. All the cars got away clean, which meant everyone was door-to-door, jockeying for position going through Turn One. Eversley was running side-by-side with the No. 74 Audi driven by Matt Fassnacht and despite his best efforts to avoid an incident, the two made contact sending Eversely into the grass.

Eversley recovered and spent the rest of the 40-minute race climbing back through the field to third. When the Hyundai of Lewis retired with a mechanical problem, Eversley was promoted to second and attempted to reel in Wilkins in the No. 99 Hyundai.

“Once we were back on the track, I knew we had one of the fastest cars in the race, so I put my head down and tried to make up as many positions as possible,” Eversley said. “Lewis had a problem, but we had our Honda reliability and kept trucking. I was able to run one of the fastest laps in the race. I took the gap down to under 10 seconds to Wilkins, but in the end we ran out of time.”

“I have an eight-point lead in the TCR points now and this is four podiums in-a-row for RealTime,” Eversley explained. “Our Honda was awesome. The car felt really good. I know RealTime has more experience running up front than anyone else, so I’m just going to keep doing what my team tells me to do and hopefully we can come out of Lime Rock with some more points.”

Merzon picked up three positions in the race to finish 11th and more importantly was turning competitive lap times in his first TCR weekend.

“I learned a lot racing the RealTime Honda Civic this weekend,” Merzon said. “I really love this car and was very excited to get my best lap of the weekend in the second race and do it consistently. I’m definitely going to try to race TCR cars more often, because they’re really fun. Thanks to RealTime Racing and my coach Ryan Eversley for helping me run as competitively as I did.”

Next up for RealTime is Rounds Five and Six of the Pirelli World Challenge TCR Championship at Lime Rock Park, May 25 – 26. Both races will be streamed live on world-challenge.com.