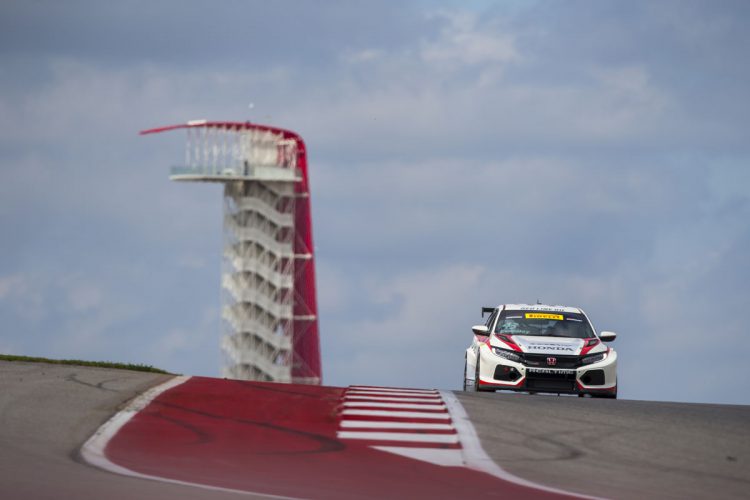 A new and fast-growing category of racecar around the globe, TCR features competition from Hyundai, Volkswagen, Alfa Romeo and Audi.

RealTime’s first chance to see how their Civic stacked up against the rest of the TCR field was in qualifying on Saturday morning. Driver Ryan Eversley was able to put his No. 43 Honda Civic Type R third on the grid and in his return to World Challenge after a year’s absence, Esayian qualified the No. 44 UnlockBitcoin.com Honda Civic Type R in 12th.

Saturday’s race got off to a rocky start for Esayian; after a perfect start, he was hit and turned around exiting Turn 1 on the opening lap. This moved him all the way to the back of the field.

“I had a good rolling start,” Esayian said. “The car was setup great. I passed around the outside and there are some inherent risks to that, but I kept it on the pavement and probably passed five or six cars. At the exit of the turn, someone understeered into my left rear wheel and sent me into a spin. I was able to continue and the car felt fine.”

“Congrats to Hyundai, Michael Lewis and our former teammate Mark Wilkins on their one-two finish today,” Eversley said. “They worked very hard in the off-season and I’m happy to see them do well. We got RealTime back on the podium where we belong and tomorrow we’ll get another shot at it.”

After his first lap incident, Esayian recovered to finish 12th.

“The car was good and I think we had a sixth- or seventh-place car, but we’ll never know,” he said. “We’ll try to prove it tomorrow. I love this Civic Type R.”

The RealTime drivers’ starting positions for Race 2 were similar to Race 1, with Eversley third on the grid and Esayian 10th, but their fortunes were reversed.

Eversley made contact with the No. 70 in the opening laps of the race. He emerged from the incident unscathed, but series officials handed down a drive-through penalty. This dropped Eversley to the back of the field.

Remarkably, he was able to claw his way back to third before the checkered flag, giving RealTime its second podium of the weekend.

“It wasn’t my intention to have contact with the Alfa at the start, so I had to serve a drive-through penalty, which I absolutely deserved,” Eversley said. “I put my head down and tried to get us some points. Fortunately, we had a yellow which bunched everyone up and I was able to really go after it and show everyone how this Honda Civic Type R could perform in traffic. We were able to get up to fourth and on the last lap, when I was battling with one of the Audis, he ran wide on track limits a few times and that got him a penalty on track limits and gave us the podium, which I think we would have had anyway had it not been for the penalty early in the race.”

A less than ideal start kicked off Esayian’s race and caused him to lose a position. He held station in 11th for the remainder of the race and finished there.

“I asked for some setup changes that took me in the wrong direction,” Esayian admitted. “This is a pretty high-speed track. In the high-speed areas the handling wasn’t as good as the car and that was my choice. I was a little too close on the start and I had to check up at exactly the wrong time.

“I learned a lot about the car,” he added. “I only first sat in it on Thursday. We ran some competitive race laps, which I was happy about. I’m learning the setup and dealing with a car without ABS and knocking the rust off. I think, moving forward, I’ll be able to perform in a way more indicative of the team and car.”

The first two rounds of the Pirelli World Challenge TCR Championship from Circuit of the Americas will air on CBS Sports Network, Thursday, April 12, at 8pm ET.

“All in all it was a really great debut for the TCR-spec Civic Type R,” Eversley concluded. “I’m really grateful to the RealTime team as well as the Honda/HPD guys for getting us up on the podium twice in our first time with a new car. I’m really looking forward to the rest of the season.”

RealTime returns to TCR action, April 27 – 29, at VIRginia International Raceway. Both races will be streamed live on World-Challenge.com.