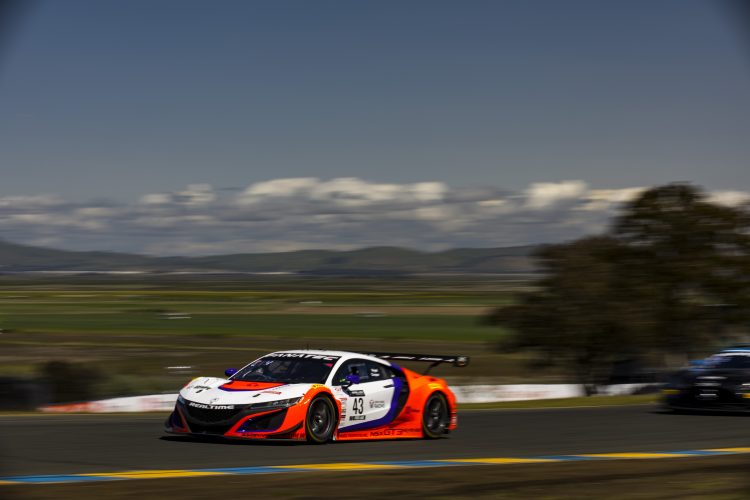 SONOMA, Calif. (April 18, 2022) – The first event of the 2022 Fanatec GT World Challenge America powered by AWS season presented many challenges for RealTime Racing (RTR). The series stalwarts faced them head on in the Pro-Am category and came away with a sixth and seventh-place finish at Sonoma Raceway.

Saturday morning the team was faced with rain for qualifying. The drivers were unphased, having turned laps in the rain on Thursday during testing. Erin Vogel was the first to qualify and put the No. 43 Acura NSX GT3 Evo22 sixth for the first race later that day. In the second half of qualifying, Michael Cooper ended up with the fourth starting spot for Sunday’s race.

In the short turnaround between qualifying and the race, the team was notified that the car’s boost levels exceeded BOP regulations during qualifying. As a result, the car would be moved to the back of the grid for the first race.

The rain was gone by race time on Saturday afternoon.

Starting from the back, Vogel wasted no time picking up positions when the green flag waved. A small incident nearly thwarted her progress, but she rebounded and got the car back to its original grid spot.

“I was chasing the Lamborghini for a few laps and hoping to get in his head a bit and got alongside him and then I thought maybe I could make it stick, but by the time I realized it was the low-percentage move that I knew it was going into it, it was too late to back out,” Vogel explained. “We got together and then the car behind and I touched as he was trying to get by. I ended up coming back from it and chased him down and was able to get by him cleanly in the same place, Turn Nine.”

When Cooper took over the car in sixth, he had a mirror-full of the other Acura entered in the field, driven by Mario Farnbacher. The two stayed close for all of Cooper’s stint and Farnbacher waited until the closing laps of the race to make an aggressive pass for the position. Cooper crossed the line seventh.

“Erin did a good job to make up a couple spots after she got put to the back,” Cooper said. “I got out there and did what I could and brought home the car in mostly clean shape. We’ll see if we can improve tomorrow.”

“We finished almost where we qualified,” Vogel added. “We qualified sixth, started 13th, I brought it back in, in sixth place and then the two Acuras battled at the end there and Farnbacher got by us, but I think seventh is a good finish considering we had to claw our way from the back.”

Sunday was nothing but sunshine, though the temperatures weren’t any warmer. Cooper started the race from fourth. He had a clean start and picked up a few positions but had to give them back as his tires began to wear.

“We had a decent start, gained a spot or two, but ultimately couldn’t keep pace with the front Pro-Am group,” Cooper said. “Eventually we were a victim of tire wear, but I managed to hold a few cars off and bring the car in, in fourth.”

Shortly after Vogel returned to the circuit, the race’s only full-course caution came out. While this enabled her to catch the rest of the Pro-Am cars, it gave her no cushion to the cars behind. On the restart Vogel did her best to defend but ended up losing a spot.

“I’m still trying to figure out the clutch in this car and stalled when I tried to leave,” Vogel said. “I think I did everything right. We’ll have to look at the data, but I don’t know why it stalled.

“I had a good battle at the end with the TR3 Lamborghini, but he had more brakes than me at the end and was able to get by me in Turn Seven.”

“We had good driver changes and pretty good pit stops,” Cooper said. “I think this was a solid start and we’re moving forward with a lot of good information.”

“I’m really looking forward to a new track, The Ozarks, next month,” Vogel said. “We’ll see how the car is there and hopefully we’ll have a good weekend.”

Rounds Three and Four of GT World Challenge America takes place at Ozarks International Raceway May 20 – 22. Both races will be streamed live on https://www.gt-world-challenge-america.com/watch-live.