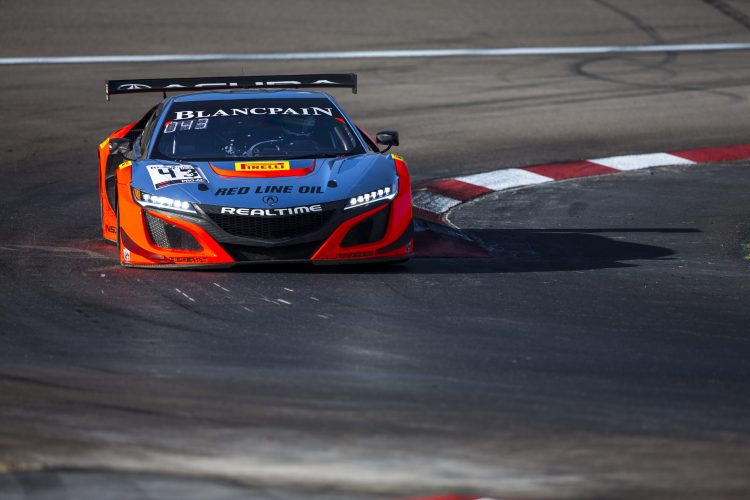 The final event of 2019 came with a unique format; not only would both races take place on Saturday, but the second race would take place at night.

Mike Hedlund qualified the No. 43 Acura NSX GT3 Evo third in class for Saturday’s first race. Dane Cameron was able to qualify on the Pro/Am class pole for the night race.

“The roval track at Vegas turned out a lot better than we expected,” Cameron said. “It wasn’t perfect for our car. Something more fast and flowing would have been nice, but this layout had a lot of tight corners. We seemed right in the mix though and it looked like a Pro/Am win was possible.”

Race One got off to a tough start for Hedlund who lost several positions.

“I had a good launch but coming out of Turn One, but because the track has paved runoff and no curbs, there isn’t anything stopping someone from going wide and coming back on. I got stuck in the middle and that allowed people to get around us. I shuffled back a couple positions. Over the next couple of laps I was able to get back around all the cars that got around me.”

A flawless pit stop performance from the RealTime crew helped Cameron re-enter the track in third. From there he was in the midst of a three-car battle for the lead with the No. 91 Porsche driven by Matt Campbell and the No. 5 Acura driven by Marc Miller.

“The Wright Porsche and the Gradient Acura were having a pretty good fight,” Cameron recalled. “I was holding back a bit waiting for the opportunity to pop up for me to get by and it did.”

When Campbell and Miller made contact, Cameron was able to move into second.

“I was really close to the Porsche, but never enough to get by,” Cameron said. “I made a couple moves here and there, but the right moment never presented itself.”

The RealTime Acura crossed the finish line in second, but the contact between Campbell and Miller earned the winning Porsche a post-race penalty that promoted Cameron and Hedlund to the win. The victory brings RealTime’s race win total to 101.

Starting from the Pro/Am pole position, Cameron faced intense pressure from the Campbell’s Porsche. Toward the end of his stint, Cameron had to fend off multiple attacks from Campbell, but was able to hand the car over to Hedlund still in the class lead.

“The start to the second race was pretty difficult,” Cameron said. “I was able to keep the lead in Pro/Am, but there was some bumping and banging. It felt like if affected the right-rear of the car and our balance was off a little for the rest of the race. I was struggling a bit and didn’t have the same pace as we did in the first race. It was really hard to keep the Porsche behind.”

Following pit stops, Hedlund found himself in the same position as his teammate, only it was Alex Imperato at the wheel of the Porsche. Imperato tried to take advantage of Hedlund getting stuck behind a lapped car to make a pass, but the Porsche made contact with the slower car and was given a drive-through penalty. This gave Hedlund a much more comfortable lead.

A scary moment erased that lead and while Hedlund confirmed the car was okay, the second-place Ferrari got by and Imperato’s Porsche was back on his tail.

“Coming through NASCAR Turn One, we’re doing about 140mph in fifth gear on the apron,” explained Hedlund. “It was there that I came across some oil. I don’t know how I didn’t crash into the wall at the top of the banking. Once I knew the car was okay, I spent the next couple laps cleaning off the tires. By the time I was back up to speed, the Ferrari was around us.”

With only a handful of laps left, Hedlund just needed to hold off Imperato to the finish. He did so by just 0.433-second.

The runner-up finish was more than enough to secure the Pro/Am team title for RealTime. It is a remarkable accomplishment considering the team missed the first two races at Circuit of the Americas and had to briefly race in the Pro/Pro category after driver substitution.

“It’s super cool to win the team championship, especially after missing three races in the Pro/Am category,” Cameron said. “It just shows how great of a season we had at RealTime. It also shows how strong the NSX package is. I had a really fun time running a full season with RealTime and hopefully we can do it again.”

In addition to the team title, RealTime was presented with “GT Team of the Year” honors and Hedlund finished third in the Pro Am Cup, even though he only partook in eight of the 14 Rounds.

News on RealTime’s plans for the 2020 race season will be announced as it becomes available.