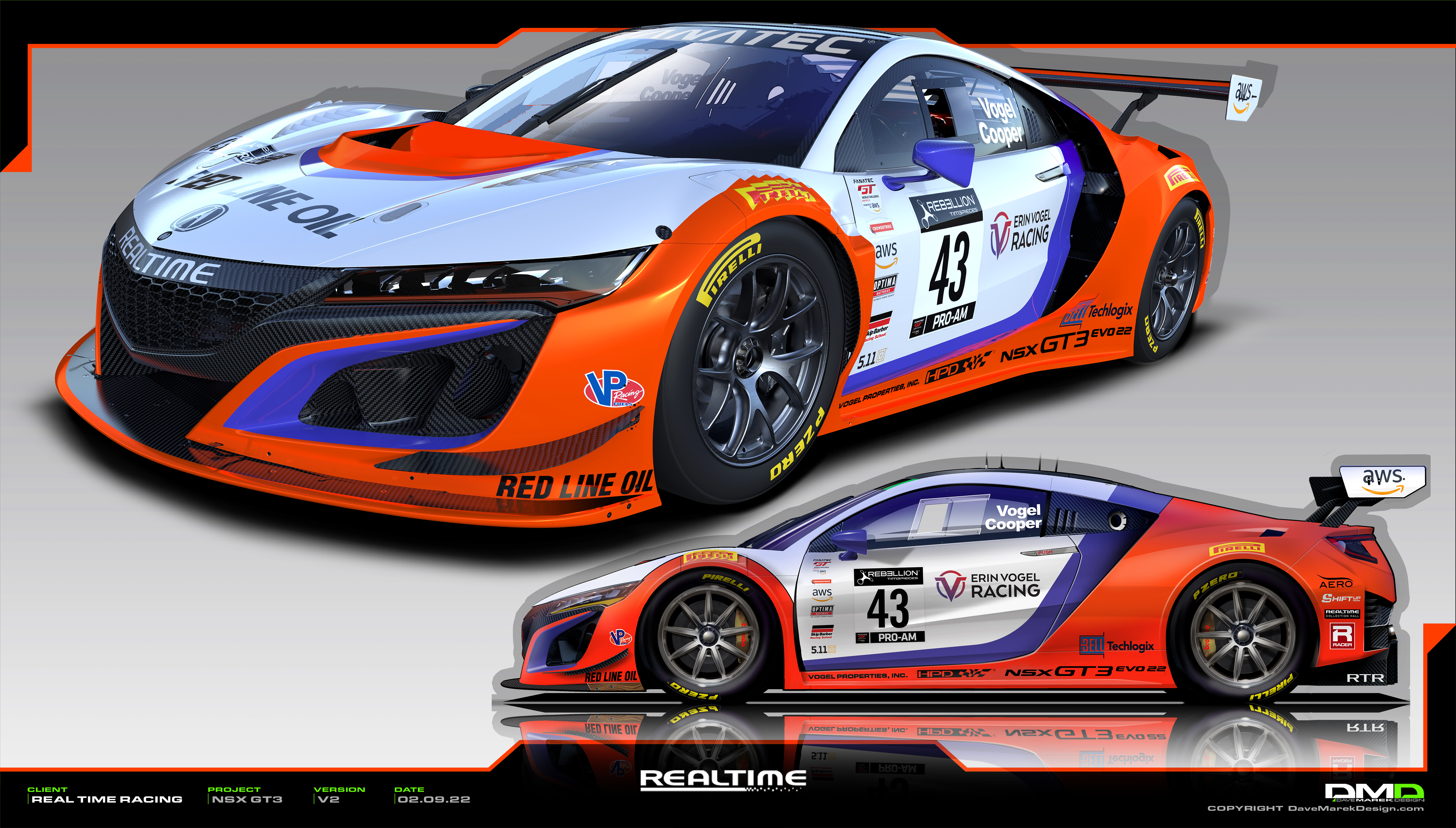 Vogel is in her third year of World Challenge competition but has achieved a great deal in that time. Last year, at VIRginia International Raceway, co-driving with Cooper, she became the first woman to win a Pro-Am race in any SRO GT3 championship worldwide.

“I’m very excited to be working with RealTime and the Acura NSX GT3 program,” Vogel said. “I know Michael Cooper and I are in good hands with RealTime, whose storied history of working with Acura will give so many advantages to the program.”

In addition to her GT World Challenge win last season, Vogel earned three podium finishes and a pole position. The new season brings a change in team and car for the Southern California native, but it will be her third season co-driving with Cooper.

“I’m very fortunate to have found a great mentor in Michael, and we’ve been lucky to continue working together in World Challenge for the past few years,” Vogel added. “I’m ready to show up in 2022 with even more consistency. My goal is to be on the podium every weekend this season, on the top step as much as possible, and consistently running in the top five.”

In more than a decade of racing professionally, Cooper has won multiple World Challenge championships. He is fresh off an LMP3-class win in the legendary Rolex 24 at Daytona. The New Yorker has raced with RealTime before, filling in at Portland International Raceway in 2018 and finishing fourth and second in a Honda Civic Type R TCR.

“It’s very exciting that Erin and I will be teaming up with RealTime in GT World Challenge,” Cooper said. “The team has quite a winning pedigree and I know how good they are from the years we competed against each other in GT competition. I have some first-hand experience with the team too as I was fortunate enough to drive for them once in recent years.”

All dates on the 2022 GT World Challenge America schedule consist of two 90-minute races, save for the season finale at Indianapolis Motor Speedway, which is an eight-hour endurance race. Each 90-minute race requires a pit stop with driver change in a pre-determined window.

“This is a strong driver lineup for RealTime,” team owner Peter Cunningham said. “I’ve known Erin for the last few years and watched her progress and we’ve known Michael much longer. We’re going to do all we can to make sure they add more wins to their resumes. Hopefully their achievements will contribute to success for Acura and Honda Performance Development as well.”

All races will be streamed live on https://www.gt-world-challenge-america.com/

Now in its 36th year of professional competition, RealTime has earned 101 race wins in World Challenge, almost exclusively with Honda or Acura vehicles. RealTime’s winning history even extends into ice racing, SCCA PRO Rally and the Pikes Peak International Hill Climb. The most prolific team in World Challenge history, RTR has amassed 15 Drivers’ Championships and 14 Manufacturers’ titles for Honda and Acura since joining the series in 1993. The team’s most recent success was the 2019 GT World Challenge America Pro/Am Class Team Championship.

Honda Performance Development, Inc., (HPD) has a rich heritage creating, manufacturing, and supporting Honda Racing and Acura Motorsports customers since 1993.  From pinnacle racing in INDYCAR and IMSA to commercial racing programs, HPD powers the dreams of professional and amateur racers from age 4 to 40+. HPD is a wholly owned subsidiary of American Honda Motor Co., Inc. and leads all of Honda and Acura’s high-performance racing programs in North America.  HPD specializes in the design and development of race engines, chassis and performance parts, as well as technical and race support. HPD offers parts and race support to Honda and Acura amateur and professional motorsports racers, and is continually expanding its palette of racing programs that make Honda racing products available to all racing styles.

Produced by SRO Motorsports Group, Fanatec GT World Challenge America powered by AWS is the premier North American GT series, contributing to the global GT World Challenge Championship. Its rich 33-year history offers the perfect customer racing environment that showcases the talents of a diverse group of drivers from around the globe. The 2022 season features 13 races at some of the best circuits across North America. Each race weekend includes two 90-minute races, except the season finale, which is a single eight-hour race at Indianapolis Motor Speedway. This race also serves as the third round of the 2022 Intercontinental GT Championship Powered by Pirelli.