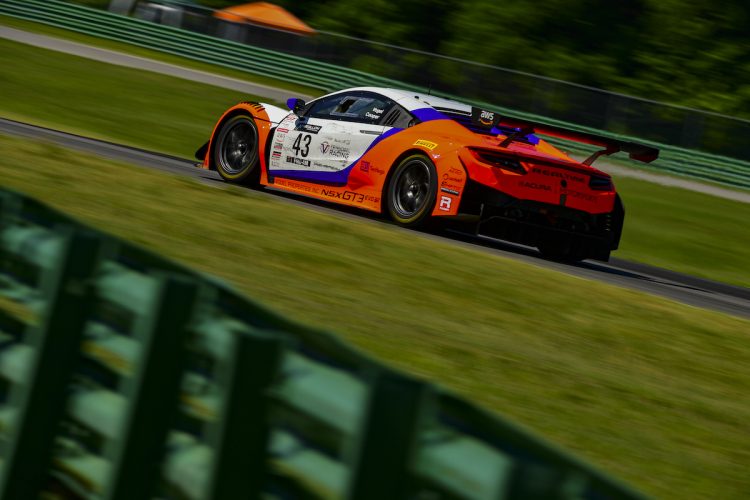 The halfway point of the Fanatec GT World Challenge America powered by AWS season has arrived at Watkins Glen International. RealTime Racing (RTR) drivers Erin Vogel and Michael Cooper will return to the wheel of the No. 43 Acura NSX GT3 Evo22 for Rounds Seven and Eight in upstate New York.

The team has had a busy five weeks since VIR, where its Round Six race ended with a heavy impact in the tire wall. RTR repaired the car and tested it at its home track, Road America, to confirm it is race ready.

RTR arrives in Watkins Glen ready to build on the gains made in the first half of the GT World Challenge America season. The team has already finished in the top five of the Pro-Am category three times and is aiming to extend that positive trajectory to a podium finish.

“I only drove Watkins Glen for the first time last year, and already it is one of my all-time favorite tracks. It has very hilly terrain and it takes guts to flow speed around a lot of fast corners that have blind exits as well as changing camber. It’s a track that suits my driving style and Michael’s.

“We were fortunate to have an opportunity a few days ago to shake down the rebuilt car, so while you can never say that there won’t be any gremlins, at least we got the car out and put around a hundred miles on it without issue. But I think we all just want to have a clean weekend and hopefully see some better results in qualifying and see if we can score some decent points to put us back on track for the second half of the season.”

“Watkins Glen is a challenging track with lots of elevation changes and quick corners. The circuit also has a great rhythm that makes it really enjoyable to drive in a GT3 car. I’m really looking forward to getting back in our NSX and racing. Everyone at RealTime has been working very hard, we just had a very positive test and can hopefully roll that momentum into this weekend.

“The goal for the weekend is simple: run up front and fight for the Pro-Am win.”

“Our weekend at VIR ended with a heavy crash. The team worked tirelessly to get the car back to 100 percent and a recent test at Road America showed us the work paid off and we’re feeling very encouraged heading to Watkins Glen. RTR has a record of six World Challenge victories at Watkins Glen and we hope to add to that this weekend.”