REALTIME SECURES FIRST WIN OF 2019 IN RETURN TO WORLD CHALLENGE 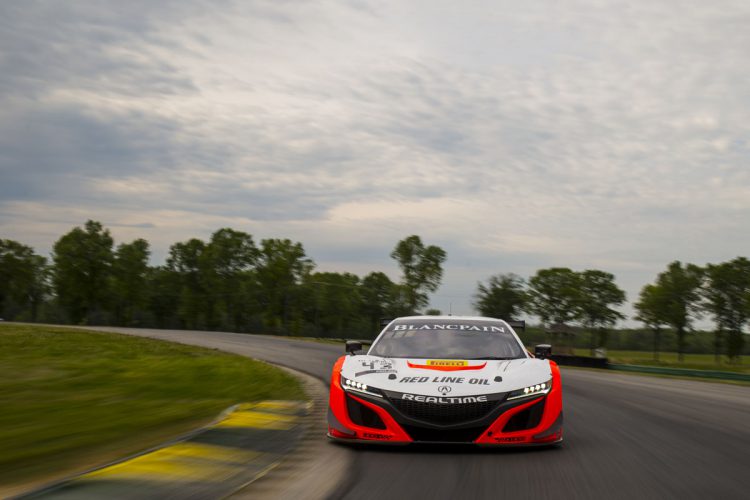 RealTime missed the first GT World Challenge America doubleheader of the season, but having recently taken delivery of its No. 43 Acura NSX GT3 Evo, the team was ready for Rounds Three and Four with drivers Dane Cameron and Bret Curtis.

The team completed a brief shakedown of the car at Autobahn Country Club before making the trip to VIR. The Red Line Oil sponsored Acura NSX GT3 was fast right off the truck, posting the quickest Pro-Am time in Practice 1 and running second quick in Practice 2 before it was red flagged for rain.

“We didn’t have that much time in the car before we got here this weekend,” Curtis said. “We had the first practice session, which Dane and I split, and that’s all we really had before qualifying. It’s a testament to the team that the car was as good as it was right out of the box.”

In his qualifying session, Curtis entered a 1:46.534, which put him 11th on the overall grid, but fifth in the Pro-Am category.

In the second qualifying session, Cameron earned the Pro-Am pole position with a 1:43.621, which was also good enough for fourth overall.

“I wasn’t sure how we’d do this weekend because we had limited track time and a lot of other teams came out to test,” Cameron said. “In Practice 1, I was pleasantly surprised at how balanced the car was. We had good pace overall, so I knew from that point that we were going to be in the hunt.”

Starting from fifth, Curtis was on a charge and up to second before the first full-course caution was issued 20 minutes into the 90-minute race. Shortly after the restart, a questionable call from race officials hurt RealTime’s chances of scoring a win.

“Two laps after the restart a Pro-Am car tried to pass me in Turn One,” Curtis recalled. “I had him alongside me, but only at my left rear wheel, so I drove my line. He got onto the grass, spun and made contact with me and somehow I was given a penalty. He was never really alongside me, so I’m not sure why we got the penalty, but I’m sure we would have won the race if not for that.”

Focused forward, RealTime executed a flawless pit stop to put Cameron in the car. He was able to pick up several spots to finish fourth.

“We were pretty far back in the queue,” Cameron said. “I got by a couple of guys and got a little stuck where we were. We had really good pace. We had the fastest Pro-Am lap of the race, so I was pleased with our performance.”

When the green flag waved, Cameron had no problem keeping up with the Pro category cars. He picked up a spot and settled into third.

“I thought the more cars I could get between me and the next Pro-Am car, the longer it would take them to get to me,” Cameron explained. “If one of the Pro cars really wanted to get around me I wasn’t going to put up a fuss about it, but it seemed like we had enough pace to keep most of them at bay.”

As the leaders began to peel off for their pit stops, Cameron inherited the overall lead just before the halfway point of the race.

Cameron pitted and handed the Acura NSX over to Curtis with 41 minutes left in the race. Curtis came out of the pits on cold tires and into the middle of a battle amongst the Pro category leaders.

“Getting the car with a sizeable lead like that makes my job a lot easier,” Curtis said. “I knew my goal was to not screw up. I made it easy for the Pro cars to pass. It hurt my lap time a bit, but it was more important to maintain the gap to second than to get tied up with the Pro guys. I’m really happy. The team and Dane did a great job.”

Curtis took the checkered flag and the Pro-Am victory by a comfortable margin over second-place.

“This weekend was better than expected considering the timeline, so a big thank you to everyone at RealTime for busting their butts from the minute the car arrived in the country,” Cameron concluded. “It validates my confidence to sign up for the program. I’m happy we got that first win right out of the gate and hopefully there’s many more to come.”

Curtis and Cameron are the 15th and 16th drivers to win a race for RealTime. It’s the team’s 93rd win in World Challenge and 19th in GT competition.

Next up on the calendar is Canadian Tire Motorsport Park, May 17 – 19.