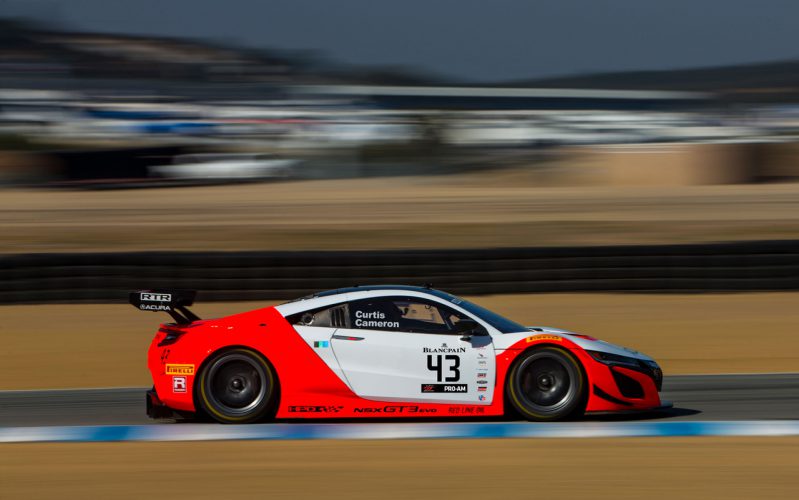 After capturing the 2018 TCR Drivers’ Championship with the Honda Civic Type R TCR, RealTime will return to the GT category with the NSX GT3 Evo, marking the team’s 33rd year of racing Honda and Acura machinery.

The No. 43 will be piloted by a formidable Pro/Am pairing. Cameron is a two-time IMSA Champion and currently pilots the Acura Team Penske ARX-05 in the WeatherTech SportsCar Championship. Curtis has won multiple IMSA races and competed in the world’s most prestigious sports car races including Le Mans, Daytona, Spa, and Sebring.

“I’m very excited to enter the Blancpain GT World Challenge with RealTime in the NSX,” Curtis said. “I’ve seen RTR run successfully and earn many championships in World Challenge over the years, so joining them is an incredible honor. I’m also incredibly privileged to be sharing the car with Dane Cameron. Dane is an amazing talent and has already won some important championships and I’m sure he has many to come. Dane and I worked successfully together in 2015, so I feel really comfortable and very eager to work with him again in 2019.”

Though World Challenge has seen its share of name changes over the decades, 2019 will be RealTime’s 26th consecutive season with the series. Curtis is a new driver to the team, but Cameron drove an NSX with RealTime in the 2017 Intercontinental GT Challenge race in Monterey.

“I’m thrilled to be back with RealTime,” Cameron said. “My first experience with Acura was with them a couple years ago and it was a lot of fun. I’m happy to be back with Bret again too. I did some driver coaching with him a few years ago and he’s a great guy that puts a lot of work into his craft. I think we make for a strong pairing that can definitely win races. With RealTime’s support, we’ll have all the ingredients we need to be successful.”

With the program coming together shortly before the season opener at Circuit of the Americas, RealTime will make its season debut at the second event on the Blancpain GT World Challenge Americas schedule: Virginia International Raceway, April 26-28.

The team’s 2019 partners will be announced in the coming weeks. In addition to its NSX program, RealTime has Honda Civic Type R TCR rides available for interested customers.