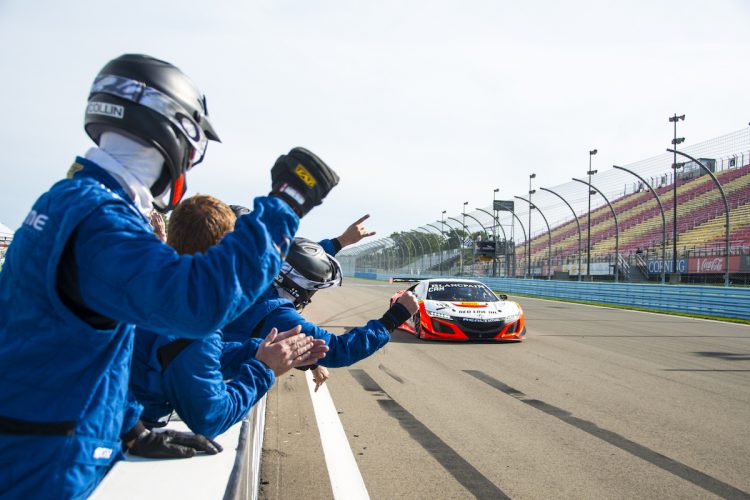 WATKINS GLEN, N.Y. (Sept. 1, 2019) – RealTime Racing had a dominant weekend at Watkins Glen International for the latest rounds of the Blancpain GT World Challenge America. The driving duo of Mike Hedlund and Dane Cameron claimed victory in both Saturday and Sunday’s races.

Hedlund qualified the No. 43 Acura NSX GT3 Evo for Saturday’s race and Cameron for Sunday’s. Both drivers placed the car second on the Pro-Am grid; in Cameron’s case, just 0.471-second off the class pole and fourth overall.

“We felt pretty strong,” Cameron said. “We thought the NSX might be strong here based on its history in other championships. A couple little tweaks were all we needed to make everyone happy. From there we just focused on execution in the races.”

Hedlund left nothing on the table for the start of Saturday’s race, charging to the lead on the opening lap.

“I was able to take the lead in Turn One,” Hedlund said. “I wanted to run some solid laps to give Dane a good gap when I handed the car over. The crew did an amazing job turning a 4- or 5-second lead into a 15-second lead. They made the weekend easy for us.”

The seamless pit stop and driver change to Cameron put the No. 43 in position to cruise to victory.

“The last 50 minutes or so with me behind the wheel were pretty quiet,” Cameron said. “We were by ourselves. There was no drama and it was pretty close to a perfect day.”

Another sensational start on Sunday saw Cameron go from fourth overall to second overall and hold there until the lead Ferrari pitted. Cameron pitted three laps later and handed the car over to Hedlund.

“Race Two was a little more exciting with more fighting,” Cameron said. “I had a decent start and got up to second overall. I tried to keep some space to the next Pro-Am car and try to get a gap for Mike. Another great stop from the RealTime crew meant that we came in with a small lead and left with a huge one. We still had the overall lead even.”

Hedlund led five laps ahead of the Pro class Ferrari and Bentley. He was eventually overtaken but never came under threat from another Pro-Am car and crossed the finish line with a 20-second margin of victory.

“I was pushing as hard as I could, but we’re here to win Pro-Am,” Hedlund said. “We talked before the weekend started that if we as a team had a shot at an overall podium, I’d try my best. At the rate they caught me, I knew they were quicker and I didn’t want to risk getting punted off. I decided to put my head down and drive as hard as I could and if they tried to make a move, I wasn’t going to defend, because I didn’t want to slow down and lose the gap to the second car in our class.”

The weekend success marked RealTime’s 97th and 98th wins in World Challenge competition since 1993 as the Wisconsin team inched closer to its 100th victory.

RealTime will have to wait until September 20 – 22 to see if it can hit the 100-win milestone, at none other than its home track: Road America.