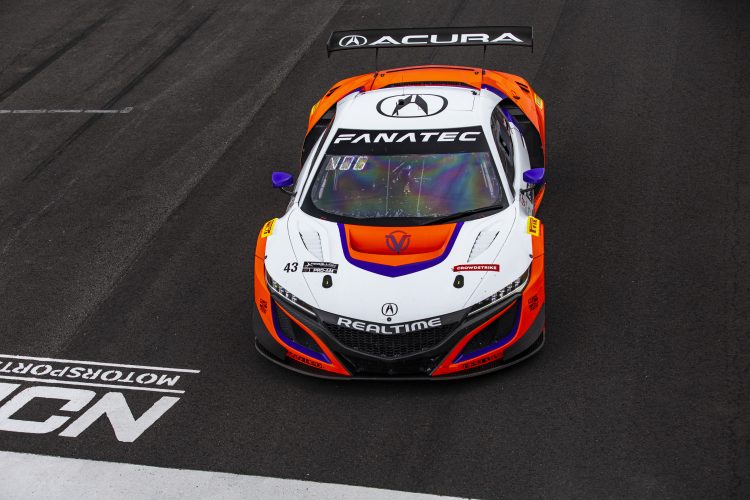 NEW ORLEANS, La. (May 23, 2022) – It was a weekend of highs and lows for RealTime Racing (RTR) at NOLA Motorsports Park, site of the latest rounds of the Fanatec GT World Challenge America powered by AWS. The team had a breakthrough fifth-place finish on Saturday but was knocked back down by lady luck on Sunday.

A broken fuel pump wire robbed Vogel and Cooper of valuable track time in Friday’s final practice session. The team had the car all fixed up for qualifying, but the drivers were still on the hunt for more speed. Vogel qualified 11th for Race 1 and Cooper qualified 10th for Race 2 while they continued to dial in the No. 43 Acura NSX GT3 Evo22.

Everybody at RTR did what they needed to do to maximize their potential for a strong finish on Saturday.

Vogel played it smart on the opening lap when several cars got together, littering the track with debris and bringing out the first full-course yellow. In that one lap she picked up five spots and was into sixth. She held the position on the restart, put her head down and turned consistent laps that eventually got her a sizeable gap to the Pro-Am cars behind her.

“It was a little wild on the start,” Vogel said. “It’s never fun starting at the back of the field because there are almost always bound to be incidents and you just have to hope you can avoid getting collected. Fortunately, I was just able to avoid the collision in Turn Three having gained a few positions and then was also able to take advantage of the restart for more gains.”

When it was time to bring the car in, the crew executed a perfect stop, the fastest of any team on pit lane. Cooper returned to the circuit in fifth thanks to the team’s quick work.

During his stint, Cooper was being chased by the Ferrari of Ryan Dalziel. With 25 minutes left in the race, Dalziel was up to Cooper’s bumper and the fight was on. Not long after, the second full-course caution was issued to retrieve a disabled BMW in a gravel trap.

“I was racing with Dalziel in the Ferrari when the yellow came out and I was most concerned with how many cars behind us would close up,” Cooper said. “There was a lot of rubber building up on the tires during the yellow and the restart was probably more exciting than it needed to be because the overall leader was directly in front of us.”

The final restart could have gotten ugly, but Cooper did exactly what he needed to do to keep Dalziel behind him to the checkered flag.

The fifth-place finish was incredibly satisfying to the team after some of its earlier troubles in the weekend.

“Oh man, it feels really good to finish in the top five today after a really tough qualifying and honestly a tough weekend so far overall,” Vogel summarized. “I’m so proud of the team for their effort and for the quick pit stop – we had the fastest stop out of the whole field and gained a couple more positions there. I’m very proud of Michael for holding fifth through the whole second half of his stint with the Ferrari in his mirrors. It was hard work today and it feels good to have earned a top five through solid racecraft even without the speed we’re looking for.”

Dark clouds loomed over NOLA Motorsports Park in the lead up to Race 2 on Sunday.

The No. 43 picked up a spot even before it got on track courtesy of a penalty for another Pro-Am car which bumped Cooper to ninth on the starting grid.

As the cars left pit lane for their formation laps, the rain began to fall, but only on half of the circuit. It stopped just in time for the green flag, but the first complex of corners were going to be very slippery.

Cooper did not make it through unscathed and contact cost him several spots.

“I got pushed off in the brake zone for Turn One by a Lamborghini and basically fell back to last place,” Cooper said. “It was a battle to recover from there and turn the car over to Erin in a decent position.”

Cooper made it back to ninth by the time the pit window opened. He handed the car to Vogel, who returned to the circuit in eighth thanks to another perfect pit stop from the RTR crew.

Vogel was all by herself on track for the first half of her stint. Without any full-course yellows, the next car ahead remained out of sight.

With 18 minutes left in the race, another drizzle of rain came across the track and Vogel was reeled in by the No. 88 Lamborghini. Though he filled her mirrors in the final laps of the race, Vogel stayed focused and brought the car home in eighth.

RealTime returns to GT World Challenge America action June 17 – 19 at VIRginia International Raceway in Danville, Va. Both of the weekend’s races will be streamed live on the series website.